One poem that you can safely assume that an American student has encountered is Robert Frost's "The Road Not Taken." It is in many anthologies used in schools and has become a phrase used by people who may not even know the source. It's so much of a classic, that it's almost a cliché.

An article by Katherine Robinson on www.poetryfoundation.org goes into greater detail than your high school English teacher may have in discussing the poem.

Did you know that Robert Frost wrote “The Road Not Taken” as a joke for a friend? That friends was fellow poet Edward Thomas who took walks with Frost. Apparently, Thomas was quite indecisive about the path to take and sometimes expressed regrets later about the one not taken.

Frost wrote the poem in 1915 and told Thomas that after reading the poem at a college, he was surprised that the audience had been “taken pretty seriously … despite doing my best to make it obvious by my manner that I was fooling. … Mea culpa.”

From the poem's opening decision about choosing a road, to the conclusion that the choice has made all the difference, there is an odd and somewhat surprising word journey.


The Road Not Taken

Two roads diverged in a yellow wood,
And sorry I could not travel both
And be one traveler, long I stood
And looked down one as far as I could
To where it bent in the undergrowth;

Then took the other, as just as fair,
And having perhaps the better claim,
Because it was grassy and wanted wear;
Though as for that the passing there
Had worn them really about the same,

And both that morning equally lay
In leaves no step had trodden black.
Oh, I kept the first for another day!
Yet knowing how way leads on to way,
I doubted if I should ever come back.

I shall be telling this with a sigh
Somewhere ages and ages hence:
Two roads diverged in a wood, and I—
I took the one less traveled by,
And that has made all the difference. 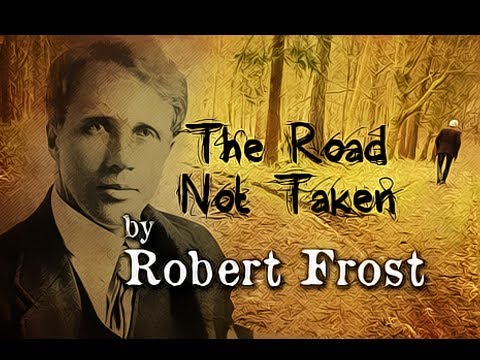 Initially, the speaker wishes he travel both roads, but admits that the one he took looked "just as fair" as the other and people using both roads had "worn them really about the same.”  Despite the usual interpretation of the poem, it's important to note that the two roads are more similar than not - "And both that morning equally lay / In leaves no step had trodden black."

This month's prompt is to consider roads not taken. Of course, roads come in many forms - not all looking like a road.

So, is this a classic poem that is prompting us to write about choices and decisions and regret?

Frost wrote this poem when Europe was deep into WWI and a year before America would enter the war. Frost sent the poem to his friend Edward Thomas, who, like many readers to follow, did not see it as a joke (about him) but as a serious meditation on decision-making. He may have even connected the poem with the war and America's entry into it. Shortly after receiving this poem in a letter, Thomas enlisted in the army and was killed in France two months later.

At the end of the poem, the speaker says he will "be telling this with a sigh / Somewhere ages and ages hence."  Is that a sigh of content or regret?

The answer depends on how you view the final lines:

I took the one less traveled by,
And that has made all the difference.

Has the difference been a good one or is there the regret of the opening? The speaker really would like to have taken both roads, but knows "how way leads on to way, I doubted if I should ever come back."

And if both roads were both very similar, how much of a difference would there have been in his life if he had chosen the other?

There are certainly "roads" you did not take, but that may have been a good or bad decision. It may not have been been your choice. Or you may have make the choice casually or quite unaware that it would carry any significant consequences.