Death is a dialogue between me and myself.
No one else is interested in the discussion

Jalāl ad-Dīn Muhammad Rūmī, known more popularly simply as Rumi was a 13th-century Persian poet, jurist, Islamic scholar, theologian, and Sufi mystic. His poems have been widely translated into many of the world's languages and transposed into various formats. Rumi has been described as the "most popular poet" and the "best selling poet" in the United States.

at a Dodge Poetry Festival through the translations by Coleman Barks

. I was reading some poems randomly in The Essential Rumi today and noticed that I kept landing upon poems about death.

That sounds pretty depressing, but the poems are not grim. Here are two I found.

I’ve said before that every craftsman
searches for what’s not there
to practice his craft.

A builder looks for the rotten hole
where the roof caved in. A water-carrier
picks the empty pot. A carpenter
stops at the house with no door.

Workers rush toward some hint
of emptiness, which they then
start to fill. Their hope, though,
is for emptiness, so don’t think
you must avoid it. It contains
what you need!

This is how strange your fear of death
and emptiness is, and how perverse
the attachment to what you want. 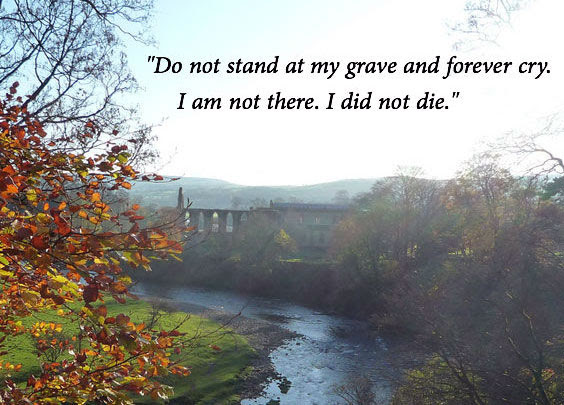 No end, no end to the journey
no end, no end never.
How can the heart in love
ever stop opening.
If you love me,
you won’t just die once.
In every moment
you will die into me
to be reborn.

Into this new love, die.
Your way begins
on the other side
become the sky
take an axe to the prison wall,
escape
walk out like someone
suddenly born into color.
Do it now!