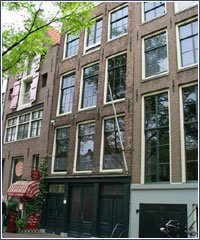 The poem by Andrew Motion that we used as a model this month ("Anne Frank Huis") was written immediately after his visit to the Anne Frank house (huis) in Amsterdam.

I am convinced that houses are haunted by those who lived in them. I don't really mean ghosts or poltergeists, but I suppose I do mean something supernatural in the dictionary sense of "relating to an order of existence beyond the visible observable universe."

The homes of our childhood, those of relatives, probably even the one we live in now, have things not observable that dwell there. Historic homes, museums, train stations and many other public buildings have residual memories.

On June 12, 2006, Anne would have been 77. Not so old - about my mother's age. This seems strange to me because Anne is still a character from high school history and English classes to me, and she seems somehow much further away in time than 77 years.

I recall seeing the Hollywood film version of her story which came out in 1959. I wouldn't have seen it in a theater then - probably I saw it on TV and then in high school in a classroom. My memories of the film are stronger than the book now. I remember that the actress who played Anne (Millie Perkins) reminded me of Audrey Hepburn (who I had a crush on). Perkins was born in Passaic, NJ and is still acting today. I liked the film. I liked the book. I liked Anne.

And I remember the house from the film (it was filmed in Amsterdam & on Hollywood sets).
If you never saw the film, you can watch a clip online at the official Anne Frank web site.

I was Google surfing Anne Frank's house when I was working on this prompt and came across "other sites" to visit near the house. I wonder what your writing would produce if you did this walking tour of the area:

RIJKSMUSEUM AMSTERDAM - is the largest museum of art and history in the Netherlands. VAN GOGH MUSEUM - largest Van Gogh collection in the world
HASH AND MARIJUANA MUSEUM and the Seksmuseum, which holds a collection of pornographic materials, both found in the nearby
RED LIGHT DISTRICT - since Amsterdam is well-known for its legalized prostitution and live sex shows. Tourists can take a walk through this unique section of the city where prostitutes are posed in window displays or take in a live sex show. Please note that taking pictures of the live window displays is not permitted.

This month's prompt asks you to write about a house or building that affected you in the way that Anne's hiding place did for Andrew Motion. Your poem should certainly include details of the place itself, and you should avoid "haunted house tales" which is not at all the point of this writing prompt. Perhaps, this is poem as memoir though the memory may not be your own. 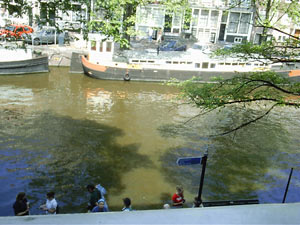 A view of the canal from the Anne Frank house.
Posted by Poets Online on Thursday, October 12, 2006

Your readers may be interested to know that this term is used both in the ghost hunting field and in psychology.

I enjoy very much the extended information about each writing prompt that is available here but I think it should also be added to the web site. I don't think most people read blogs.
Thank you.

Rather nice site you've got here. Thanx for it. I like such topics and everything connected to this matter. I would like to read a bit more on that blog soon.

A nice site Thanks alot