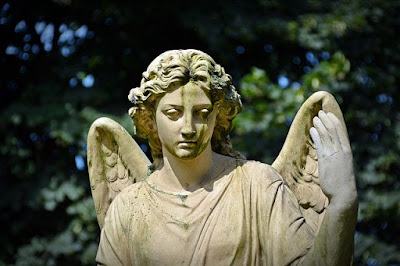 When I visited Prague this year, I encountered two writers of the past as I wandered the streets: Franz Kafka and Rainer Maria Rilke. They were both born in Prague. Like Kafka, Rilke's family had a plan for his life's work. They wanted him to be a lawyer and take over his uncle’s law firm. But both men wanted to be writers, if that was a possible career.

Rilke published some "love poetry" and it gained some popularity, so law was left behind.

He led a much more Romantic and romantic life than Franz. He was part of the Munich arts scene. He fell in love with a woman fifteen years his senior who helped him develop as a more serious poet. When they broke up, he became a bit of a gigolo, seducing rich noblewomen who supported him.  He wasn’t particularly good looking, but he seems to have used his poetry quite well with women.


He met Princess Marie von Thurn und Taxis, another rich, older woman. But she didn't like the way Rilke treated women and refused to be seduced. They were close friends and wrote hundreds of letters, and she let Rilke stay in her castle in Trieste, on the Adriatic Sea.

At Castle Duino one winter while he was living there alone, Rilke said he heard a voice in the wind while walking along the cliffs. Then an angel appeared and spoke to him about life and death, beauty and humanity. It set Rilke to immediately begin writing what would become The Duino Elegies.

The elegies are made up of ten long verses. The two sequences, Duino Elegies and The Sonnets to Orpheus are his most famous poems. They have made him a poet described as one of "romantic transformation and spiritual quest" and the poems are often described as "ecstatic."

I was surprised to learn that Rilke's angel symbolism was influenced by their depiction in Islam. There they represent the embodiment of transcendental beauty.


What interests me this month about the The Duino Elegies is their inspiration. They are intensely religious and mystical poems, but I don't expect that many of you reading this have had similar "angelic" inspirational moments.

Who, if I cried out, would hear me among the angels'
hierarchies? and even if one of them
pressed me against his heart: I would be consumed
in that overwhelming existence. For beauty is nothing
but the beginning of terror, which we still are just able to endure,
and we are so awed because it serenely disdains
to annihilate us. Every angel is terrifying.

Every angel is terrifying.

Some people would define an angel as a spiritual being acting as an agent, or messenger of God. Conventionally, they are represented in human form with wings and perhaps clothed in a long robe. Some people see angels as more Earthly persons of exemplary conduct or virtue or transcendental beauty.

I believe that Rilke’s angels are invisible. They are manifested human longing. They are outside any language, but we only have language for our expression.

I feel sorry for his angels who are trapped in a realm of living in both the present and the past simultaneously. They exist in the real and the unreal. That must be terrifying.

Every angel is terrifying. And yet, alas, I invoke you,
almost deadly birds of the soul, knowing about you.
But if the archangel now, perilous, from behind the stars took even one step down toward us:  our own heart, beating higher and higher, would beat us to death.

Terrifying and yet we call upon them. And they have no voice but through Rilke and you.

This month we write about angels or the angelic.