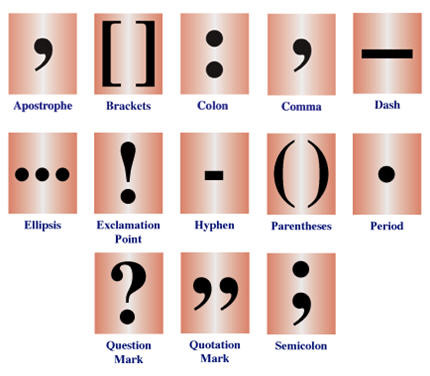 PUNCTUATION: Some poets use it. Some don't.

Of course, there are many poems where punctuation is most definitely necessary, but there are also cases where it is not. Are there any "rules" for its usage?

When lines are short - three words or less - punctuation (commas and periods) can look silly.

Fitzgerald may not have been a fan of the exclamation point, but the New York School of poets took a liking to it.

Walt Whitman liked... the ellipsis.  Emily Dickinson was fond of using -  the dash. A.R. Ammons did things with: the colon.  E.E. Cummings, besides his experiments with Upper and lOWER case, liked to make use of (parentheses).

Much of this has been studied and I'm sure there are more than a few graduate theses out there on related topics.


A typical manuscript for a poem might include several undated versions, with varying capitalization throughout, sometimes a "C" or an "S" that seems to be somewhere between lowercase and capital, and no degree of logic in the capitalization. While important subject words and the symbols that correspond to them are often capitalized, often (but not always) a metrically stressed word will be capitalized as well, even if it has little or no relevance in comparison to the rest of the words in the poem. Early editors removed all capitals but the first of the line, or tried to apply editorial logic to their usage. For example, poem 632 is now commonly punctuated as follows:

and E.E. Cummings may have more in common in this regard than you would expect. Cummings made his use of punctuation so much of a style that it may seem to be  parody at times.

This poem about a grasshopper has just about everything happening in it.

He uses the words, punctuation, and space to create a "concrete" visual image of a grasshopper jumping. The word and letter jumble makes more sense as we dig deeper and yet some of it is for pure visual rather than reader effect.

I have used some of his poems with children who like finding the hidden poem. They find the jumping-all-about grasshopper r-p-o-p-h-e-s-s-a-g-r who as we look up now gathering to leap leaps arriving...

They realize the poem is not just meant to be "read."

And then, there's the ampersand.  &  Not really punctuation, but an abbreviation of a sort. As I have written on another blog:.


The ampersand is a curious thing in our language that dates back to the 1st century A.D.

Originally, it was a ligature of the letters E and T.

What's a ligature? In writing and typography, a ligature occurs where two or more graphemes are joined as a single glyph. Ligatures usually replace consecutive characters sharing common components.

Suffice it to say, the ampersand is the most common one we use in English.

"Et" is Latin for "and" - as in et cetera, which is such a mouthful that we feel the need to shorten even that to etc. It can actually be further shortened as &c.

The & picked up traction in poetry with the Beats and the Black Mountain poets. (Ginsberg: "blond & naked angel") and E.E. Cummings, Frank O'Hara, Amiri Baraka, John Berryman, Nick Flynn and Nikky Finney. There was an article about its use in a recent Poets & Writers Magazine (note the & there too).

So here is our writing prompt(s) - more challenging than it might sound at first. Write a poem that deliberately makes use of punctuation to create its effect on the reader.  If that seems too much the "writing exercise," try writing about punctuation.