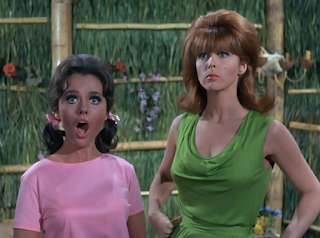 In reading a post online about some Emily Dickinson trivial curiosities and the one that struck me again (because I heard Billy Collins talk about it years ago in a workshop) was her connection to the castaways on Gilligan's Island.

If you want to sing most of her poems (and I could imagine myself doing this with students), use the theme to TV's 1960s "classic" Gilligan's Island.

Give it a try and sing this first stanza of "Because I Could Not Stop For Death."   (If somehow the melody of "The Ballad Of Gilligan's Isle" is not burned into your neurons deeper than any poem, give a listen below)

Because I could not stop for Death,
He kindly stopped for me;
The carriage held but just ourselves
And Immortality.


And the why of this working is that Emily usually used the "common meter" in her poems. The TV theme also uses it, and it is used in lots of nursery rhymes and Protestant hymns. It's four beats followed by three beats.

But I am quite happy to just imagine Emily on the beach with Ginger and Maryann, swinging in their hammocks, drinking from a coconut and singing her poems to the delight and total misunderstanding of all those around her.

If it is raining on your summer day, trying singing Emily's "Summer Shower" poem.

A drop fell on the apple tree,
Another on the roof;
A half a dozen kissed the eaves,
And made the gables laugh.

A few went out to help the brook,
That went to help the sea.
Myself conjectured, Were they pearls,
What necklaces could be!

The dust replaced in hoisted roads,
The birds jocoser sung;
The sunshine threw his hat away,
The orchards spangles hung.

The breezes brought dejected lutes,
And bathed them in the glee;
The East put out a single flag,
And signed the fete away.
Posted by Ken Ronkowitz on 8/14/2017