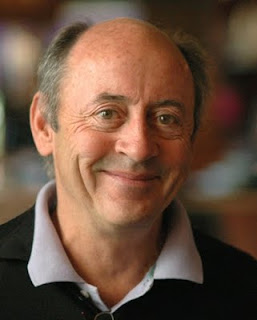 Take a listen to these three poems read by Billy Collins at a Dodge Poetry Festival.

Collins is much loved, and equally criticized, because his poems are accessible - even enjoyable.

These three are not so typical of that.

I particularly like the idea behind "The First Night" which was inspired by this line by Juan Ramón Jiménez:  "The worst thing about death must be the first night."

I can sense the audience wondering if Collins means to be funny with some lines.

I used a few of his poems in a class last week. Students read "The Lanyard" silently first. I heard no laughter. Then I read it - pretty seriously - aloud. I didn't notice any chuckles from the crowd. Then I played an audio file of him reading it with an audience who laughed throughout the poem. The class wasn't rolling in the aisles, but they did laugh, smile and do that little exhalation of breath that shows they "got it."

Did they need permission to laugh? Was the laughter contagious? (Watch a comedy in a full theater and alone in your house for comparison.) Don't they know that poems can be funny?

Next we listened to him read "The Revenant" - a poem in the voice of a dog who was put to sleep to its owner. The laughs came much easier.

I asked them if they thought this poem was like most other poems - "You know, if the poet says it's a dog, it's probably not a dog. What would this poem be saying if he's talking about people?"