Allusions to 'The Wasteland'

As an undergrad, I was quite enamored by the poetry of T.S. Eliot. It started with Prufrock and "The Wasteland" and led me to The Four Quartets.  I was in love with all the allusions to other poems, mythology etc. It impressed me. It was a puzzle.

I'm not as enamored by poetry that is a puzzle as I used to be, but I still admire Eliot's poetry.

There continue to be allusions to Eliot in pop culture, especially in music - Genesis, Manic Street Preachers, Arcade Fire and Bob Dylan are all artists that have used Eliot's poetry in their lyrics.

Bob Dylan references "The Waste Land" with the line “in the wasteland of your mind” from “When The Night Comes Falling from the Sky” and in his “Desolation Row” he has “Ezra Pound and T.S. Eliot / Fighting in the captain’s tower” - probably over the edits Pound made to the poem.

Via Open Culture, I found a clip of Dylan riffing on "The Waste Land" on his Theme Time Radio Hour show that he did about ten years ago.


After listening to that, you might to hear the real thing read by Tom himself. He's not a great reader, but he does pronounce words and break lines as he intended them to be.

When I read "The Wasteland" in college I read it with a woman classmate that I was also enamored with, and one of things we shared was poetry. She was also into astrology and she really liked this section of the poem.

Madame Sosostris, famous clairvoyante,
Had a bad cold, nevertheless
Is known to be the wisest woman in Europe,
With a wicked pack of cards. Here, said she,
Is your card, the drowned Phoenician Sailor,
(Those are pearls that were his eyes. Look!)
Here is Belladonna, the Lady of the Rocks,
The lady of situations.
Here is the man with three staves, and here the Wheel,
And here is the one-eyed merchant, and this card,
Which is blank, is something he carries on his back,
Which I am forbidden to see. I do not find
The Hanged Man. Fear death by water.
I see crowds of people, walking round in a ring.
Thank you. If you see dear Mrs. Equitone,
Tell her I bring the horoscope myself:
One must be so careful these days. 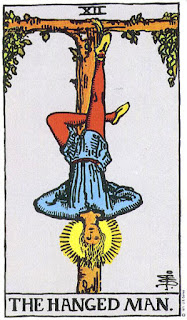 I am not so much a fan of Eliot himself as I am of his poetry and find here and there I recall it in my own poetry. The poem you posted above brought back my old undergrad days where were devoted a period of time to all his work.