Hermann Hesse on Books and Reading

Books and reading don't always get a lot of respect and attention these days.

German-born Swiss writer and painter Hermann Hesse wrote an essay titled “The Magic of the Book” in 1930 that is a reminder about why we love to read books and how important that simple act can be.

The essay is in his posthumously published My Belief: Essays on Life and Art.

Among the many worlds that man did not receive as a gift from nature but created out of his own mind, the world of books is the greatest… Without the word, without the writing of books, there is no history, there is no concept of humanity. And if anyone wants to try to enclose in a small space, in a single house or a single room, the history of the human spirit and to make it his own, he can only do this in the form of a collection of books...

We need not fear a future elimination of the book. On the contrary, the more that certain needs for entertainment and education are satisfied through other inventions, the more the book will win back in dignity and authority. For even the most childish intoxication with progress will soon be forced to recognize that writing and books have a function that is eternal. It will become evident that formulation in words and the handing on of these formulations through writing are not only important aids but actually the only means by which humanity can have a history and a continuing consciousness of itself...

The great and mysterious thing about this reading experience is this: the more discriminatingly, the more sensitively, and the more associatively we learn to read, the more clearly we see every thought and every poem in its uniqueness, its individuality, in its precise limitations and see that all beauty, all charm depend on this individuality and uniqueness — at the same time we come to realize ever more clearly how all these hundred thousand voices of nations strive toward the same goals, call upon the same gods by different names, dream the same wishes, suffer the same sorrows. Out of the thousandfold fabric of countless languages and books of several thousand years, in ecstatic instants there stares at the reader a marvelously noble and transcendent chimera: the countenance of humanity, charmed into unity from a thousand contradictory features. 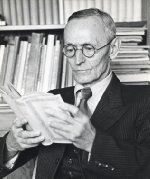 Hermann Hesse (1877-1962) was born in Germany and later became a citizen of Switzerland. As a Western man profoundly affected by the mysticism of Eastern thought, he wrote many novels, stories, and essays that bear a vital spiritual force that has captured the imagination and loyalty of many generations of readers. In 1946, he won the Nobel Prize for Literature for The Glass Bead Game.