The Secret Poetic Life of Trees 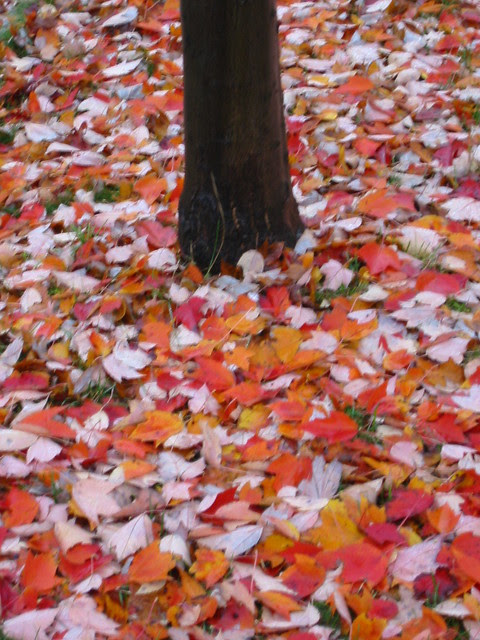 I like trees because they seem more resigned to
the way they have to live than other things do.
- Willa Cather

This month's prompt was inspired by a series of programs about trees that I listened to on the BBC. They were created in response to the ash dieback disease that has hit trees in the UK. Roger McGough hosts Poetry Please and presented some tree poems, old and new by DH Lawrence, Philip Larkin, Thomas Hardy, WB Yeats, Gerard Manley Hopkins and others.

"The Secret Power of Trees"  looks at Britain's woodlands that were planted for timber or hunting but are now also used to help the mentally ill and elderly people as part of what is known as "social forestry." The power comes with seeing woodlands as therapeutic and healing landscapes, and not just by new age types. He points out that in Japan, doctors take seriously the practice of "forest air bathing", and claim all kinds of health benefits from simply being in the woods. It's a different trend in the poetry of trees, since in much older poetry, forests were often seen as scary places, full of evil spirits and outlaws.

Thinking about trees, some poems come to mind immediately, like "Birches" by Robert Frost which ends with that glorious wish to be a swinger of birches.

I'd like to get away from earth awhile
And then come back to it and begin over.
May no fate willfully misunderstand me
And half grant what I wish and snatch me away
Not to return. Earth's the right place for love:
I don't know where it's likely to go better.
I'd like to go by climbing a birch tree,
And climb black branches up a snow-white trunk
Toward heaven, till the tree could bear no more,
But dipped its top and set me down again.
That would be good both going and coming back.
One could do worse than be a swinger of birches.

Moving amateur birch swinging into a profession, one segment from the radio program looks at a professional tree climber, James Aldred, who climbs one of Britain's tallest trees, a giant redwood affectionately called Goliath, and sleeps in its branches.

In our current season, I think of  "Winter Trees" by William Carlos Williams

All the complicated details
of the attiring and
the disattiring are completed!
A liquid moon
moves gently among
the long branches.
Thus having prepared their buds
against a sure winter
the wise trees
stand sleeping in the cold.

But the two poems I decided to focus on this month for our writing prompt are poems that feature women interacting directly with a tree.

Not that anyone would
notice it at first.
I have taken to marveling
at the trees in our park.
One thing I can tell you:
they are beautiful
and they know it.
They are also tired,
hundreds of years
stuck in one spot—
beautiful paralytics.
When I am under them,
they feel my gaze,
watch me wave my foolish
hand, and envy the joy
of being a moving target.

Loungers on the benches
begin to notice.
One to another,
"Well, you see all kinds..."
Most of them sit looking
down at nothing as if there
was truly nothing else to
look at until there is
that woman waving up
to the branching boughs
of these old trees. Raise your
heads, pals, look high,
you may see more than
you ever thought possible,
up where something might
be waving back, to tell her
she has seen the marvelous. 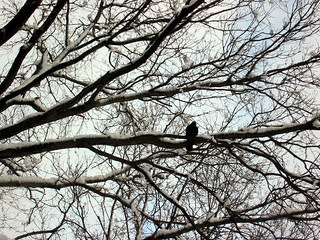 Another woman who might be seen from a distance as - odd? - is looking up into a plum tree and addressing the tree, its fruit and a visiting bird.

Woman Looking Up Into A Plum Tree by Melanie McCabe

Strung with whistle bones, frail reeds fledged, a bird
can fly or fold in, tuck beneath the wing the skull's
little engine, that tiny grist, that whit of will.

This is the secret kept in the crook of the limbs:
what claims flight must first be hollowed, must
whittle to a straw grace. Desire, that heavy

marrow, will someday open, riddle with holes
for wind to clean. The wet plum will parch to its
stone pit, dwindle and lift its faint whiff of almond.

But she is rooted still, tang of riven earth on
the back of her tongue, a late seed considering
another rending, an improbable sprouting into

turning air, a farfetched bloom. If she lightens, it is
slowly. Above her, the bird unfolds, beats sky with
thoughtless wings. She does not yet envy its going.

This month's prompt is obviously to write a poem that focuses on someone interacting, perhaps addressing, a tree. Your woman (or Man Swinging From Birches or Man Sleeping in a Redwood) will also need to be specific in their tree choice. It's sad how many people can't even identify the trees on their own property or ones they pass every day.  Of course, in Jane Kenyon's tale of "Taking Down the Tree," the specificity is that the tree is a Christmas tree, which is an alternate and legitimate take on the prompt too.