Prompt: The Erotics of Gossip

Gossip is that casual conversation or reports about other people, typically involving details that are not confirmed as being true. The etymology of the word is from Old English godsibb, from god and sibb, the term for the godparents of one's child who were generally very close friends. And plenty of gossip comes from "friends."

Nowadays, the media is full of gossip with entire companies like TMZ and Eonline built on talking about the lives of celebrities.  Newspapers were the earliest mass media for gossip and famous for their juicy headlines.

But gossip still comes over the backyard fence or is whispered in a classroom and high school hallway or in the workplace. 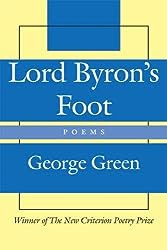 I was reading about George Green's book of poems, Lord Byron's Foot

. Green is a professor at Lehman College (where Billy Collins spent many years teaching) and that is his first poetry collection.

The title is a bit of gossip itself coming from the fact that Byron had a deformed foot that caused him a lot of grief and was one of those celebrity secrets that probably generated plenty of gossip at social events.  The book is, to quote Byron, “a little quietly facetious upon every thing” written in blank verse.


The subject matter is not George Green but the world of celebrity that also interested poet Frank O’Hara. The people of art, movies, big cities like New York, celebrity and the ephemeral.

Green adds some formality to the poems, but the topics are loose and dishy.

Lana Turner has collapsed!
I was trotting along and suddenly
it started raining and snowing
and you said it was hailing
but hailing hits you on the head
hard so it was really snowing and
raining and I was in such a hurry
to meet you but the traffic
was acting exactly like the sky
and suddenly I see a headline
LANA TURNER HAS COLLAPSED!
there is no snow in Hollywood
there is no rain in California
I have been to lots of parties
and acted perfectly disgraceful
but I never actually collapsed
oh Lana Turner we love you get up

Green works some of the same gossip beat.


Marilyn killed herself because she thought
that middle age began at thirty-five.
In Liz’s case it did, but she kept going,
though Dick went down in flames (Exorcist II).

In a critical study of O’Hara, Hazel Smith says that gossip in poetry is “straddling the realm of the intimate … encourag[ing] voyeurism” and involving the reader in an “erotics of gossip.”

Your assignment this month is to do some poetic gossiping. It can be celebrity-style or the more everyday. You might want to start by looking at some of those gossipy sites mentioned at the top of this post for a headline starter.