One complaint you might hear from poets who dislike "found poetry" is that it's not poetry. (There's another group with the same argument for prose poems.)

Because this month's writing prompt is found poems, I have been more in tune with "finding" poems. When I saw that Facebook allowed me to grab some of the "status updates" I have posted there during 2009, I tried it.

Now, "status" (as defined in the Merriam-Webster Online Dictionary) is a noun coming from Latin (see state) into English circa 1630 and meaning
1. position or rank in relation to others
2. state or condition with respect to circumstances

Then what was my state or condition in 2009 according to my Facebook life? 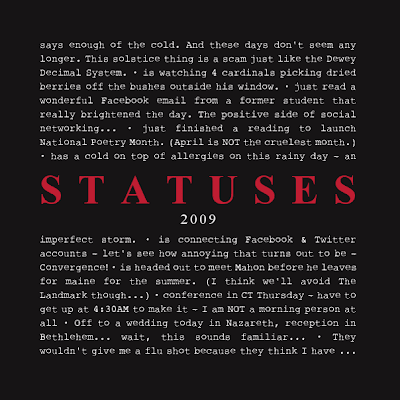 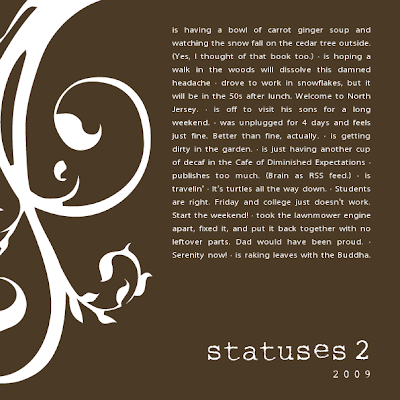 Is there a poem in there? Maybe. I came up with this at first look.

cardinals picking dried berries.
days don't seem any longer
on this rainy day
April is not the cruelest month


It's just interesting to think about something like your online life as being recorded and then looking at it in the context of a poem. Just throwing out ideas...
Posted by Poets Online on Friday, February 19, 2010