Poems For A Snow Day 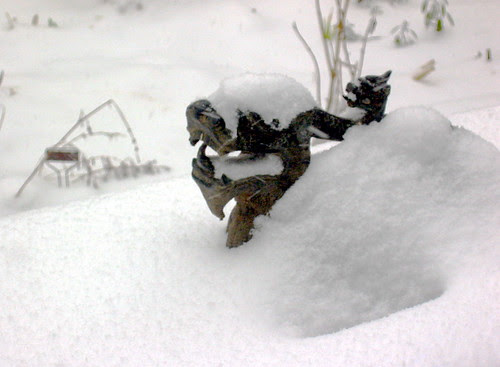 I am home for another snow day from school. Whether you are the student or the professor, the thrill of being home from school because of snow has not waned. Unfortunately, the shoveling and the thoughts about making up the lost class time will come too - but for now, I go online and search for some snow poems to enjoy with my third cup of coffee.

The Academy of American Poets website offers plenty of searchable possibilities. There are the standards that you find in many anthologies - Stopping by Woods on a Snowy Evening by Robert Frost, or The Snow Man by Wallace Stevens, for example.

Here are the opening lines from a few others -

Once with my scarf knotted over my mouth
I lumbered into a storm of snow up the long hill
and did not know where I was going except to the top of it.
In those days we went out like that.
Even children went out like that.
Someone was crying hard at home again,
raging blizzard of sobs...

The sun that brief December day
Rose cheerless over hills of gray,
And, darkly circled, gave at noon
A sadder light than waning moon.
Slow tracing down the thickening sky
Its mute and ominous prophecy,
A portent seeming less than threat,
It sank from sight before it set...


Why is the Color of Snow?
by Brenda Shaughnessy

Let's ask a poet with no way of knowing.
Someone who can give us an answer,
another duplicity to help double the world.

What kind of poetry is all question, anyway?
Each question leads to an iceburn,
a snownova, a single bed spinning in space.

Poet, Decide! I am lonely with questions.
What is snow? What isn't?
Do you see how it is for me...


The Snowfall Is So Silent
by Miguel de Unamuno

The snowfall is so silent,
so slow,
bit by bit, with delicacy
it settles down on the earth
and covers over the fields.
The silent snow comes down
white and weightless;
snowfall makes no noise,
falls as forgetting falls,
flake after flake...


And, looking ahead a month...

A spring snow coincides with plum blossoms.
In a month, you will forget, then remember
when nine ravens perched in the elm sway in wind.

I will remember when I brake to a stop,
and a hubcap rolls through the intersection...

And if the kids are home with you...
Snow, Snow: Winter Poems for Children

Just Say No To Yellow Snow!: A Collection Of Winter Poems For Children