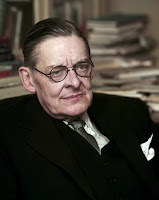 Looking at the calendar this past weekend, I realized that Ash Wednesday was this week. Though I have religious attachments to that day, the first thing I thought of was the poem by that name by T.S. Eliot.

I was a serious reader of Eliot (Is there really any other kind?) as a college student. I loved the poems and I loved the puzzle of the poems - the allusions I needed to uncover, the Greek or Latin that needed translation. It all seemed terribly intellectual to me at the time.

Eliot's "Ash Wednesday" was first published in April 1930 (though parts were published earlier in other forms).

It opens with the lines:

It was the first long poem he wrote after his conversion to Anglicanism, and it deals with the conflict within when someone who has lacked faith acquires it.

It is often referred to as his "conversion poem." It takes some inspiration from Dante's Purgatorio - spiritual emptiness to hope for salvation.

As serious as his poems are, this poem and some of the later ones are actually more casual, and melodic than his early work.


In the Western Christian calendar, Ash Wednesday is the first day of Lent and occurs forty-six days (forty days not counting Sundays) before Easter.

It is a moveable feast, falling on a different date each year because it is dependent on the date of Easter. It can occur as early as February 4 or as late as March 10th. 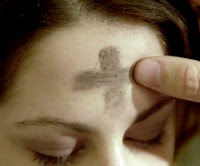 Ash Wednesday gets its name from the practice of placing ashes on the foreheads of the faithful in the shape of a cross as a sign of repentance.

The ashes used are gathered after the Palm Crosses from the previous year's Palm Sunday are burned.

I was told as a child that you left the ashes there until they wore off. The priest, as I recall, would say: "Remember, that you are dust, and unto dust you shall return." In the Roman Catholic Church in which I was raised, ashes are sacramentals (not sacraments) and could be given to anyone who wished to receive them even if they didn't belong to the church.

It really surprised when I was older to realize that Ash Wednesday, being the first day of Lent, comes the day after Shrove Tuesday or Mardi Gras (Fat Tuesday) which is the last day of the Carnival season.

Eliot's riddling wordplay in the poem, such as this section in part five, made me wonder if he wasn't playing some intellectual prank on me.

If the lost word is lost, if the spent word is spent
If the unheard, unspoken
Word is unspoken, unheard;
Still is the unspoken word, the Word unheard,
The Word without a word, the Word within
The world and for the world;
And the light shone in darkness and
Against the Word the unstilled world still whirled
About the centre of the silent Word.

It's still an interesting poem to read, though it does not hold the appeal it once did to me. The riddles push me away as a reader now. My notes in the margin seem so academic.

Perhaps, it was part of my religious training - masses in Latin as a child - that made me think that this ultimate knowledge was supposed to be hard to obtain, difficult to understand, a kind of puzzle.

It's what puts off many people about poetry. Why doesn't it just say what it wants me to hear?

I don't believe that poetry should be so difficult for us to understand. I believe that we have been working at it all of our lives.

My grandparents would speak Slovak
to my father, the aunts and the uncles
at our Sunday dinners in Newark
when they didn’t want us to know.
In those days, the priest spoke Latin.
The mystery of the faith.
The boys on the #42 bus spoke Spanish
and laughed, looking in my direction.
I knew a few words.
The waiter at the Chinese restaurant
translates my order into words
that I will never know.
This is the poet’s job -
and the reader’s.
We have been in training
all our lives.