I read Mary Jo Bang's poem "How it will feel months from now" when it was part of the Shelter in Poems series on poets.org. With that title/first line that feels so appropriate in this pandemic year, I paused and thought to myself, "How will it feel months from now?"

Mary Jo has said of this poem, “The sameness of quarantine can feel at times like a state of suspended animation, a perpetual NOW. With so little by which to measure time, I found myself noticing those things that did change, like the sky in the window at the end of a day. Seeing the color shift reminded me of other changes—some that had just happened (a siren had sliced through the silence), and some that had happened before now (a different silence, a different siren)—and that made me wonder what this NOW would feel like in the future.”

People have been calling every day "Blursday" as they seem to blend one into another. I saw someone post in October that the date was March 225th, as if once they started to "shelter at home" in March the month just never ended.

The poem says as much -

The walls of time dissolve whenever
the lights are turned off. The lights
that made the day so easy to be with.
I fold myself away.

Looking up the poet's bio, I found another poem of hers that seems to have a connection. It's another 2020 title-is-first-line poem about thinking of the future. The poem is "Speaking of the future, Hamlet":

is saying, someday this day will be over.
A moon will presumably still be above:
a bone quiet, an inflatable in the scene

—the cool blue swimming pool
it finds itself in. And I will want to be.
My mother, the Queen, will want only

my father, the King. All will be want
and get. And I will be me. And O, O,
Ophelia—will be the essence of love...

This month we are going to ask you to write a poem about how it will feel in a few months (or years). We want you to explicitly think and write about the future. This does not have to be a pandemic poem, but it might be one. We also want you to follow Mary Jo's example and make your title your first line, or at least have the title continue directly into the main poem. (This is something that usually happens in an "untitled" poem but your first line should also serve as a proper title.)

Visit our website at poetsonline.org
Posted by Ken Ronkowitz on 11/04/2020

street wall collage - Photo:PxHere The cento is a poetry form that I used with students but that I haven't used myself or used as a prom... 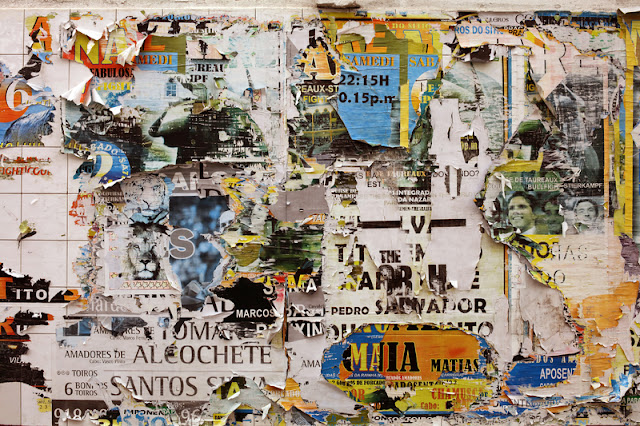