I was looking recently at a series of self-portraits by Pablo Picasso that show not only his physical aging, but the development of his style.

There are also many self-portrait poems.

In writing about her poem, "Self-Portrait on the Street of an Unnamed Foreign City," Jennifer Grotz says:

“Ut pictura, poesis: as with painting, so with poetry, the saying goes, and perhaps this is why from time to time poets, like painters, use the exercise of the self-portrait to practice seeing. If either the poet or the painter is lucky, sight leads to insight. In this unabashedly autobiographical poem, I use a shop window on a busy street, not a mirror, to view myself, and though my poem aims for truthful precision, I think it renders what, I’m convinced more and more, poems are meant to achieve, that is: registering what it feels like to pass through time.”

The confessional poetry movement of the mid-twentieth century opened up new themes and subject matter that had not been used openly in American poetry.

This poetry of the personal or “I” style of writing emerged in the late 1950s and early 1960s and was originally associated with poets such as Robert Lowell, Sylvia Plath, Anne Sexton, and W. D. Snodgrass.

I didn't read Lowell’s book Life Studies until I was in college and was surprised at how highly personal it was - revealing his life and the lives of his family. I liked it, but I couldn't imagine writing my own poems in that style if I had any intention of publishing them.

Plath and Sexton, students of Lowell who spoke about the influence of his poetry, shared their own personal and "private" experiences and feelings about big themes like death, but also very intimate details of their own trauma, depression and relationships. Poetry became more autobiographical.

The term "confessional poet" became a term that was sometimes used in a derogatory way to describe poets and poetry that seemed like pages from a diary rather than formal poetry.

But the autobiographical element has remained and today, though the term "confessional" may not be used, poems that use the specifics of the poet's life to write about universal experiences is common.

Although the autobiographical writing of Sexton with its psychological aspects (which she started writing at the suggestion of her therapist) may not be as common, Marie Howe, Maria Gillan and Sharon Olds are examples of contemporary poets whose writing largely draws upon their personal experiences.

These poets are not just recording their emotions like a diary, but applying the craft and construction of the best poetry, while still breaking conventions of subject matter and themes and shocking some readers in the process.

The artist generally is looking in a mirror to paint a self-portrait, but could also be looking at a reflection in a window or water, or at a photograph.

In our model poem for this month's prompt, "Self-Portrait at 36 w/ David" by Ellen Hagan, the poet moves from photograph, to photographer, to mirrors, including the one inside a camera.

Any well done self-portrait is more than just a literal reflection of the artist, and as a poem it is not just the autobiographical details of the poet's life at that moment.

Some poets have even mixed their poems with artists or others self-portraits. In "Self-Portrait as Vincent Van Gogh at the Asylum at Arles" by Roger Reeves, and Self-Portrait as the Bootblack in Daguerre’s Boulevard du Temple by Robin Coste Lewis, the poets look to art to find something of themselves.

For this month's writing prompt, "self-portrait" should appear in the title of your poem, and the poem itself should capture you with specificity and details in some particular time and place that you feel captures yourself like a painting or photograph. Think about using the techniques of other artists and writers who work in portraiture, confessional and memoir. 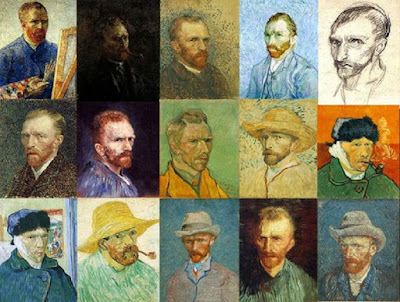