Extending This Month of Poetry 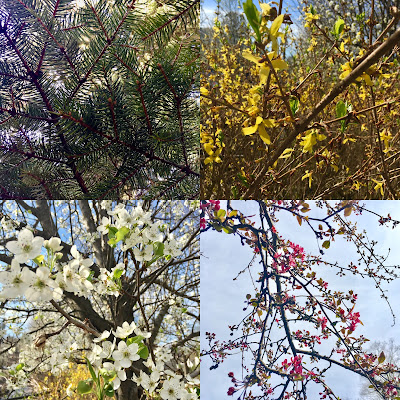 The Dodge Poetry program has offered since 1992 a "Spring and Fountain" series for teachers in New Jersey that meet for several weeks in locations around the state. This year, they added a one-week online version (registration closes 4/21/17) that is open nationwide to teachers, administrators, counselors, librarians and staff at accredited institutions.

Although this was a part of the National Poetry Month celebration, the end of April does not mean the end of poetry.

The Dodge folks sent out a packet of poems for online participants without attribution. You don't know who wrote the poems until they send a list of attributions at the end of the program. (Sure, some people probably couldn't wait and did some online searching.) Why the anonymity? So that you read "as free of judgment and preconceived notions as possible."

Below are a dozen poems that you can try out online that were in the packets used. These are not anonymous.

Dodge suggested that you take some time to slow down and read each poem silently to yourself, then out loud once or a few times. Then, "write a note to the poet who wrote the poem or to the speaker of the poem. It could be a quick thank you note, a series of questions you would like to ask the poet, or a response to questions raised by the poem. This note is not meant to be analysis of the poem, but rather a reflection of your personal response to what you’ve read, the feelings or questions that have bubbled up from a deeper place inside you."

Maybe the exercise will prompt a poem of your own.

Some Thoughts About Submissions

A quick post while we go through the final edits on poems submitted in December which will appear on Poets Online tomorrow.  The site has a...