Billy Collins and 'The Rain in Portugal' 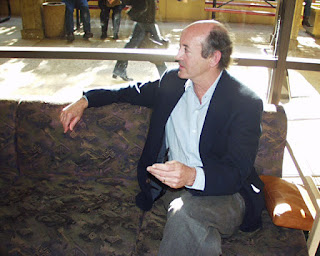 Billy Collins’s twelfth collection of poetry is The Rain in Portugal (Random House). It is a sign of Collins' popularity - and saleability - that his most recent books have been first released in hardcover, unlike most poets who go straight to paperback. His last three collections were New York Times best-sellers, and that is not typical for poetry.

All that is great. I love his poetry. But it also gets him a certain amount of dismissal by some. They say he is light and goes for the the laugh too often. Yes, if you hear him read there will be laughter. I'll see him this week at the Dodge Poetry Festival in New Jersey. I've heard him read at many Dodge Festivals. I spent a week in workshops with him on Long Island just before he became U.S. Poet Laureate (2001—2003). There were lots of laughs. But there is always more to a Billy Collins poem than the funny line that you laugh at and remember.

Take as an example his poem “Mister Shakespeare.”  As a teacher, I like this poem, set in a classroom where the poet is teaching "Introduction to Literature." The poem recalls Collins' earlier poem, "Introduction to Poetry" - a favorite of teachers.

In that earlier poem, the teacher wants students to enjoy the poem and "to waterski / across the surface of a poem / waving at the author’s name on the shore." Unfortunately, all the students want to do "is tie the poem to a chair with rope / and torture a confession out of it. " They have been trained that way. "They begin beating it with a hose / to find out what it really means."

Now, in the newer "Introduction to Literature," the teacher is again angry with students for their formality. Why are they thinking that they are being respectful calling the poet "Mr. Shakespeare?" It's just Shakespeare and it's just Hemingway and just Frost. They wouldn't watch the Yankees and call him "Mr. Jeter" or call the quarterback "Mr. Brady."  Why the formality with the poets?

And what about Frank Bidart? Well, when living poets are called only by their last name it sounds "so final."  And now we are at that place when the poet becomes reduced to academic "subject matter," like those poems the students wanted to beat into submission, all of this  is “enough to make us forget where poems begin.”

And where is that?

maybe in the upstairs room of an anonymous boy,
his face illuminated by lamplight.
He has penciled some lines in a notebook
and now he pauses to think up some strange and beautiful
title
while the windows of his parents' house fill with falling
leaves.

Billy Collins is that famous living poet who was inducted into the American Academy of Arts and Letters. But many of these poems are escapes from all those who have tried to reign in his fun along the way: 1950s America, the 16 years of “the full metal jacket of Catholic education,” even the limited exposure he had to poetry.

In "The Present," he opens with a chuckle

"Much has been said about being in the present,
it's the place to be according to the gurus"

but it's not an easy job, as any Zen practitioner knows, because the present is "always in a state of vanishing" and finding your way is tough because "no one, it seems, is able to give you directions."

In “Genuflection, he recalls that he was told of the Irish habit

of tipping the cap to the first magpie
one encounters in the course of a day
and saying to him “Good morning, sir,”

An odd tradition, "But why wouldn’t every bird merit a greeting?"

For example, that great blue heron he sees by the shore, standing as motionless "as a drawing on papyrus by a Delphic priest." For that heron, not just a good morning, "will anything serve, short of a genuflection?"

And that word recalls how

As a boy, I worked on that move,
gliding in a black cassock and white surplice
inside the boundary of the altar rail
then stopping to descend,
one knee touching the cool marble floor
palms pressed together in prayer,
right thumb crossed over left, and never the other way around.

In that week of workshop sessions with Collins (Is it okay to just use his last name?), he reminded us that since many of us had been English majors, that meant we had actually majored in death. Billy, the Catholic altar boy, had been well schooled in death early on.

In the poem "Greece," we are looking at the ruins that "were taking their time falling apart" and also seeing the very alive bathers on the beach below. But between those two, the poet writes down:

Is not poetry, a megaphone
held up to the whispering lips of death?

Death floats in and out of these poems. There is more mortality lurking in a drive through the town found in “Helium” and even in a store “Balloon Designs by Pauline” that has a good chance of outliving him - though probably not as long as those Greek ruins.

Is the poem "On Rhyme" on rhyme, or on poetry?  We all remember some poems and some rhymes that are not poems - the stitch in time that saves nine, the 30 days that have September. It sticks in the head. But Collins prefers a "Little Jack Horner sitting on a sofa / old men who are not from Nantucket." And so, rather than the rain in Spain that falls mainly on the plain, he imagines:

"... the rain in Portugal,
how it falls on the hillside vineyards,
on the surface of the deep harbors

where fishing boats are swaying,
and in the narrow alleys of the cities
where three boys in tee shirts
are kicking a soccer ball in the rain,
ignoring the window-cries of their mothers."

It's a rebellion. And you didn't even know it. That's what humor can do.
Posted by Ken Ronkowitz on Monday, October 17, 2016