Maraschino Cherries and Other Exotic Fruits 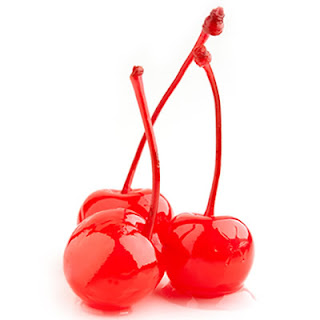 I love serendipity. I was looking at poems online looking for inspiration and came across one by Julie Kane titled "Maraschino Cherries."  I have a soft and rather sweet spot for maraschino cherries. In my childhood, they were something I loved to pilfer from our refrigerator. As an adult, I still love them in a manhattan cocktail.

Julie's poem made me think of another maraschino cherry poem that I have always liked - "Refrigerator" by Thomas Lux.

I definitely identify with Kane's


Three little girls on the morning after,
out in the kitchen poking around
for cherries soaked in whiskey like a bomb
of grown-up secrets.

They were bolder than I was in my youth. Actually, I can't recall my parents making any cocktail with those cherries that I might have stolen with some booze.  I think my mother used the cherries only on top of ice cream sundaes.


not a lot,
and what there is (a boiled potato
in a bag, a chicken carcass
under foil) looking dispirited,
drained, mugged. This is not
a place to go in hope or hunger.

It was dull vault. But there was one item that stood out:

In rereading Lux's poem, I was surprised to find that he also can not recall seeing them used in a drink, or on ice cream. He doesn't even recall anyone even popping one in their mouth. They were something to be passed on like a family heirloom.

Though I am very tempted to make our October writing prompt just maraschino cherries, that may be a bit limiting. So, we are expanding to any fruit in a poem that centers around one type. It might be nice if it is also sexy and exotic, or like a bomb of grown-up secrets or like strippers
at a church social.