Poetry and the Ouija Board 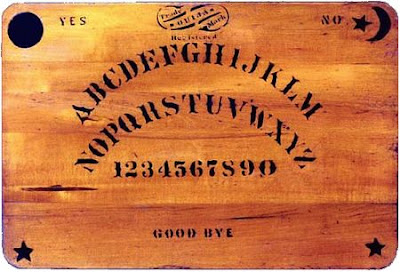 In an unusual approach to a writing prompt, starting in the late sixties and early seventies, American poet James Merrill became interested in the occult and began using a Ouija board regularly to communicate with spirits. He began to use those conversations for his poems.


For most readers, the Ouija board is a game and I’m sure Merrill wasn’t interested in the debunkers of its occult powers, but if you want some science, look into the psychophysiological explanation under ideomotor effect.  (For more on the Ouija board itself, see this related post.)

With his partner David Jackson, Merrill spent more than 20 years transcribing supernatural communications during séances using a Ouija board. He published his first Ouija board narrative in a poem for each of the letters A through Z, calling it “The Book of Ephraim.”  It appeared in the collection Divine Comedies, which won the Pulitzer Prize for Poetry in 1977.

“The Book of Ephraim,” a 90-page narrative poem in that volume. It comes from those 20+ years using the Ouija board and revelations spelled out by Ephraim. That spirit was a Greek Jew once in the court of Tiberius. Merrill mixed his own personal memories with Ephraim’s messages. In Mirabell: Books of Number, a sequel to “The Book of Ephraim” he continued that path at even greater length.

Great poetry? I prefer other work by Merrill, but with a Pulitzer and with Mirabell getting the National Book Award for Poetry, don’t rely on my critical opinions.

Merrill is an interesting poet story.  He had a pretty sweet early life as the son of a founding partner of the Merrill Lynch investment firm. He had a governess that taught him French and German. They lived on a 30-acre estate in Southampton. Yes, James rejected much of that and lived a fairly simple life.

When Merrill thought he had exhausted the Ouija inspiration, the  “spirits” “ordered” (his word) him to write and publish more. That’s spooky. This led to further installments and finally a complete three-volume book titled The Changing Light at Sandover in 1982. It is a 560-page apocalyptic epic poem.
Posted by Ken Ronkowitz on 5/28/2016