Fairy tales are a type of short story that typically features fantasy characters (dwarves, elves, fairies, giants, gnomes, goblins, mermaids, trolls, witches) and usually some magic or enchantments. They differ from other folk narratives such as legends which generally involve some belief in at least some truth to the tale.

We usually think of fairy tales as children's literature, but authors have also written modern and more adult fairy tales.

Like many of us, author Michael Cunningham read fairy tales as a child, but he continued to wonder about what happened after the tales ended. In his collection of stories, The Wild Swan, he answers that question for a number of fairy tales. Cunningham is best known for his novels The Hours and The Snow Queen (which was inspired by a Hans Christian Andersen story).

He gives us a a modern day lazy boy named Jack who lives in his mother's basement rather than get a job. One day he trades a cow for some magic beans. His poor widowed mother is stuck with this kid who is "not a kid who can be trusted to remember to take his mother to her chemo appointment, or to close the windows when it rains." But her opinion of him changes when he climbs the beanstalk and comes back with bags of gold. Mom invests in stocks and real estate. They build a mansion for themselves. He climbs the beanstalk again, More gold and they are able to buy everything they ever wanted. But Jack goes back again for even more gold even though "there's nothing left for him and his mother to buy."

In "Kissing the Toad" by Galway Kinnell, he takes that idea that appears in several fairy tales.

Somewhere this dusk
a girl puckers her mouth
and considers kissing the toad a boy has plucked
from the cornfield and hands
her with both hands;
rough and lichenous but for the immense ivory belly,
like those old entrepreneurs
sprawling on Mediterranean beaches,
with popped eyes,
it watches the girl who might kiss it,
pisses, quakes, tries
to make its smile wider:
to love on, oh yes, to love on.

We also use the term "fairy tale" to describe something unusually, perhaps unrealistically, optimistic, as in "fairy tale ending" or a "fairy tale romance." Of course, not all fairy tales end happily, and some are quite grim (or Grimm).

In her book, Transformations, Anne Sexton has a number of poem-stories in her retelling of seventeen Grimms fairy tales, including "Snow White," "Rumpelstiltskin," "The Frog Prince," "Red Riding Hood" and "Rapunzel". She takes the original story and gives it a modern turn that goes much further than the modern Disney version of the character, as this opening to the poem shows:

A woman
who loves a woman
is forever young.
The mentor
and the student
feed off each other.
Many a girl
had an old aunt
who locked her in the study
to keep the boys away.
They would play rummy
or lie on the couch
and touch and touch.
Old breast against young breast…
Let your dress fall down your shoulder...

For this month's prompt, you may choose from several fairy tale possibilities:
- Continue a classic tale, or following Cunningham and Sexton, rewrite a classic for our times.
- Choose a part of the plot or an element from a tale, as Kinnell did or as in A.E. Stallings "Fairy-tale Logic."

I found in my local library a copy of  Disenchantments which anthologizes a good number of modern day fairy tale poems. 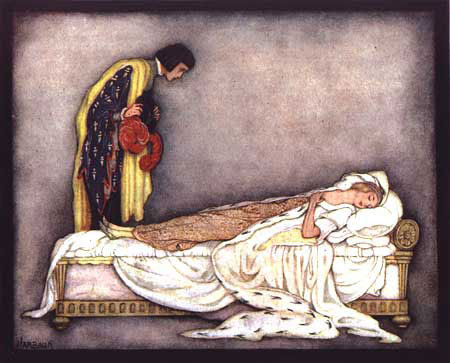