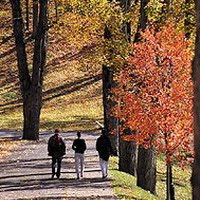 You can find this ode in many anthologies and even if you have little interest in poetry, you may recognize a line that was dropped into your memory in a classroom.

Keats wasn't having a great poetic year. In November, he would tell his brother in a letter, "Nothing could have in all its circumstances fallen out worse for me than the last year has done, or could be more damping to my poetical talent." But he wrote in another letter about this ode: "Somehow a stubble plain looks warm — in the same way that some pictures look warm — this struck me so much in my Sunday's walk that I composed upon it."

Ironically, Keats scholars have since decided that 1819 was his best year as a poet because he wrote almost all his great poems that year. The poems included a group of odes - "Ode to a Nightingale," "Ode to a Grecian Urn," "Ode to Psyche" and "To Autumn" was the last of them.

Poets often see autumn as a good symbol of aging. A preparation for winter. Young Mr. Keats took another view of the season, but he would die from tuberculosis in less than two years after writing the poem. He was 25.

Season of mists and mellow fruitfulness,
Close bosom-friend of the maturing sun;
Conspiring with him how to load and bless
With fruit the vines that round the thatch-eves run;
To bend with apples the moss’d cottage-trees,
And fill all fruit with ripeness to the core;
To swell the gourd, and plump the hazel shells
With a sweet kernel; to set budding more,
And still more, later flowers for the bees,
Until they think warm days will never cease,
For summer has o’er-brimm’d their clammy cells.

Who hath not seen thee oft amid thy store?
Sometimes whoever seeks abroad may find
Thee sitting careless on a granary floor,
Thy hair soft-lifted by the winnowing wind;
Or on a half-reap’d furrow sound asleep,
Drowsed with the fume of poppies, while thy hook
Spares the next swath and all its twined flowers:
And sometimes like a gleaner thou dost keep
Steady thy laden head across a brook;
Or by a cider-press, with patient look,
Thou watchest the last oozings, hours by hours.

Where are the songs of Spring? Ay, where are they?
Think not of them, thou hast thy music too,--
While barred clouds bloom the soft-dying day,
And touch the stubble-plains with rosy hue;
Then in a wailful choir the small gnats mourn
Among the river sallows, borne aloft
Or sinking as the light wind lives or dies;
And full-grown lambs loud bleat from hilly bourn;
Hedge-crickets sing; and now with treble soft
The redbreast whistles from a garden-croft,
And gathering swallows twitter in the skies.