I Sext the Body Electric

Facebook and Twitter shares made Lockwood Internet-famous. She is not a poet laureate. She is not a professor (never finished college) and lives far from the hip places for poets in Lawrence, Kansas. 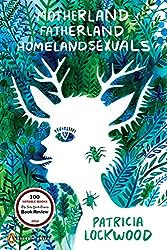 Sext: I am a water glass at the Inquisition. You are a dry pope mouth. You pucker; I wet you

Sext: I am a living male turtleneck. You are an art teacher in winter. You put your whole head through me

"Rape Joke” changed things. People have said it is funny, harrowing, important and not worth considering. That kind of response gets my attention.

Lockwood is not an unknown. Her last collection, Balloon Pop Outlaw Black

Looking through the new collection you can find poems about sexed-up forest creatures that never appear in Disney films, the Loch Ness Monster, and Whitman and Dickinson appearing as ghosts. The poems swerve between hilarious and creepy, profane and profound.

In a radio interview on Studio 260, she said “My baseline voice as a poet tends to be very serious, very grave. But in my life, I tend to be a funny person. It was a challenge that I set myself to try to integrate those two voices.”

Twitter posts ("tweets") are limited to 140 characters. Not a lot of space to compose.

Then again, Ezra Pound's famous little poem, "In a Station of the Metro," fits nicely, title and all with characters to spare.


The apparition of these faces in the crowd;
Petals on a wet, black bough.

One hundred and forty characters (including spaces and punctuation) makes for a long line of poetry.
The previous sentence is only 100 characters.

Robert Frost would have gone over by only 3 characters if he had tweeted:


Whose woods these are I think I know. His house is in the village though; He will not see me stopping here to watch his woods fill up with snow

In this shortened month, our new prompt asks you for poems composed of tweets. By this, we mean "stanzas" of 140 characters that can stand alone. You can thematically thread together as many as you wish though, so your poem can be as short as 140 characters and as long as 140 X ?  Line lengths are your choice, but stanza length is 140 characters. (If you use Twitter, you might want to compose there as it counts your characters automatically.)

To make things more interesting for readers, we are asking you to make the topic of your poem sex. Of course, that means that the serious and the not-so-serious side of the topic is fair game.