Here lies One whose Name was writ in Water 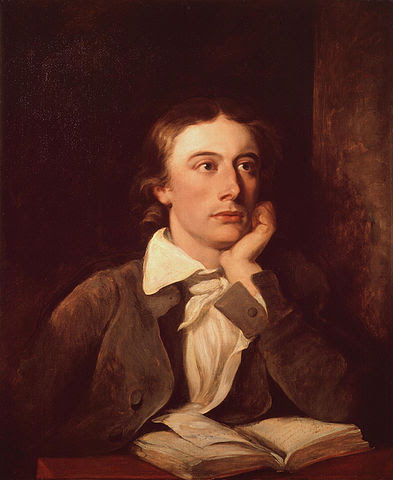 and looking at some of his letters

this past month and learned of a summer hike that Keats made.

In the summer of 1818,  Keats went on a six-week walking tour through northern England, Scotland, and Ireland. Keats and his friend Charles Brown set off in June and walked 600 miles before sailing back to London.
Keats was not an outdoorsman and had spent most of his life in London never having been out of southern England. He was 22 and had never seen a mountain.
They set off with very little in their knapsack – shirt, stockings, nightcap, towels, a brush and comb, snuff, and one book: a translation of Dante.
They started from Lancaster and headed for the Lake District. Keats’ brother George and his wife Georgina accompanied them as far as Lancaster and then continued to Liverpool, there to emigrate to America.
This was not a poetry tour but John and Charles stopped at William Wordsworth’s home. Wordsworth was not at  home.
Keats did not write his first poem until age 18. He was encouraged by a literary circle of friends in London, though he worked at a hospital to make his living. Keats’ first book, Poems, appeared in 1817 and after that, he devoted himself entirely to poetry.
Keats wrote that as the walk continued he found himself more moved by the people they met than by the landscape. He thought much of the mountains and moors seemed bleak.
He recorded that on June 29, they set off at 4 a.m. up the mountain Skiddaw. It offered a  to the Irish Sea and Scotland.
In the town of Ireby, that watched a performance of traditional dancing and Keats wrote: “I never felt so near the glory of patriotism, the glory of making, by any means, a country happier. This is what I like better than scenery.”
Keats was not pleased with the food on the trip either. In a letter, he writes: “We dined yesterday on dirty bacon dirtier eggs and dirtiest Potatoes with a slice of Salmon.” In Scotland, they seem to have survived on oatcakes and whiskey. He hated the oatcakes but enjoyed the whiskey.
Another poetry stop was to Alloway, the birthplace of the Robert Burns in Scotland. He was happier with this area. He said that the River Doon was “the sweetest river I ever saw” and he enjoyed a large pinch of snuff while standing on the Brig o’ Doon, a bridge Burns wrote about in his poems.
Keats and Brown continued through Scotland and made a short trip into Northern Ireland averaging 10-20 miles a day. By August 2, they had made it to the top of Ben Nevis, the tallest peak in the British Isles.
Keats’s health had actually not been very good before the trip, but developed a bad cold at this point and was advised by a doctor to quit the walking tour. He headed back to London, but Brown continued and walked another 1,200 miles.
1818 was not a good year for John and his family. He had financial difficulties. His brother Tom was battling tuberculosis. George and his wife made a poor investment in America and was left penniless in Kentucky.
The one happy thing in his life was his fiancée, Fanny Brawne.
1819 was a very productive year. By September, he had written a book’s worth of poems including “Ode on a Grecian Urn,” “Ode to a Nightingale,” “Hyperion,” “The Eve of St. Agnes,” “To Autumn,” and “La Belle Dame Sans Merci.” 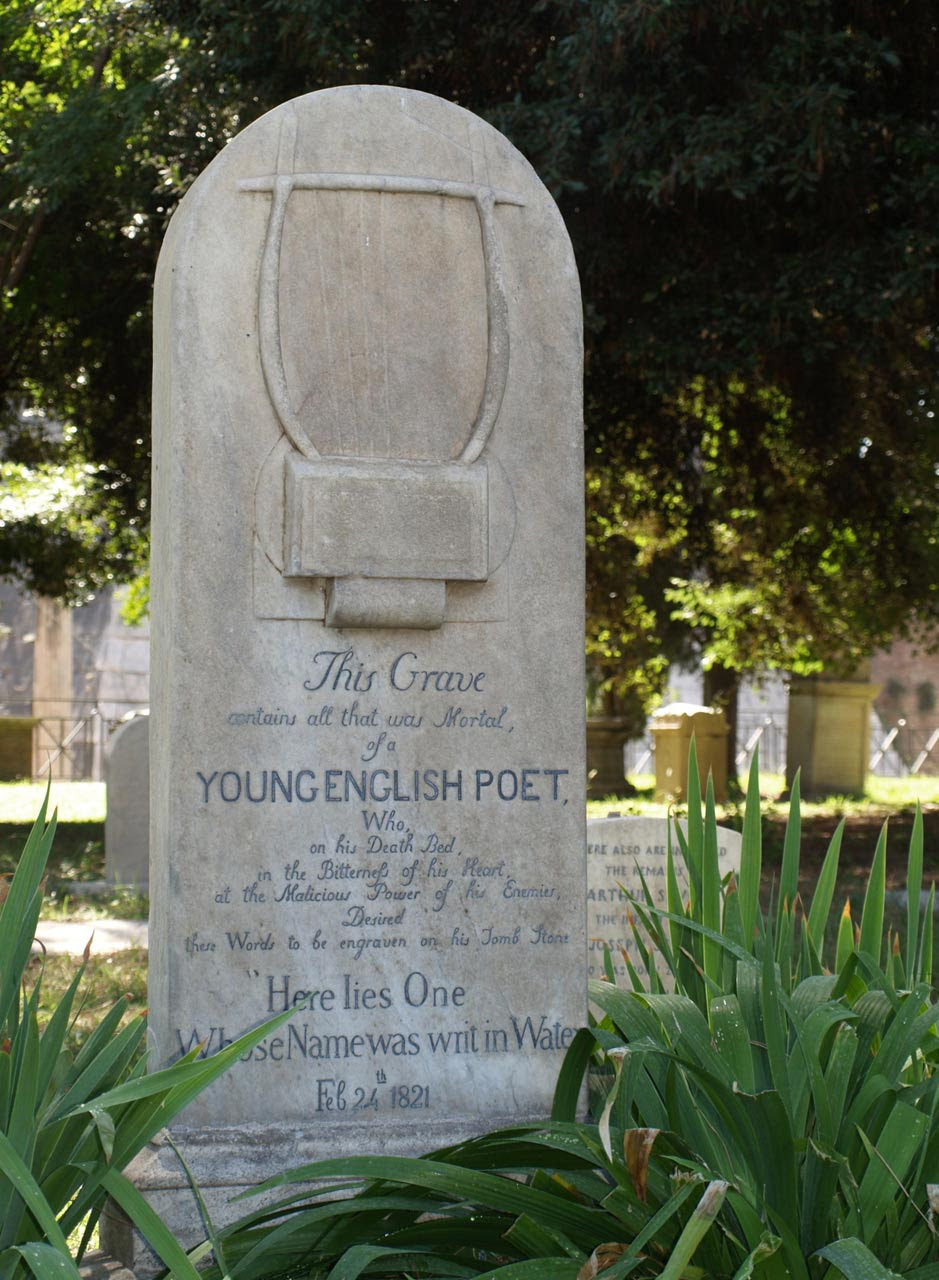 “John Keats Tombstone in Rome” by Piero Montesacro – Wikimedia Commons
John developed tuberculosis (for which there would be no cure until the next century),  possibly from caring for his brother. Early in 1820, the disease worsened and he was advised to move to a warmer climate.
In September 1820, Keats left for Rome knowing he would probably never see Brawne again. After leaving he felt unable to write to her or read her letters.
Keats wrote his last letter to his walking partner Charles Brown on November 30, 1820: “Tis the most difficult thing in the world to me to write a letter. My stomach continues so bad, that I feel it worse on opening any book – yet I am much better than I was in Quarantine. Then I am afraid to encounter the proing and conning of any thing interesting to me in England. I have an habitual feeling of my real life having past, and that I am leading a posthumous existence”.
He died in Rome on February 23, 1821 and is buried there. He was only 25 years old.
He wanted a tombstone without name or date, only the words, “Here lies One whose Name was writ in Water.” Charles Brown and another friend had the stone place but added a lyre with broken strings and this epitaph which lies some blame on critics who were harsh with Keats’ poetry.
“This Grave / contains all that was Mortal / of a / Young English Poet / Who / on his Death Bed, in the Bitterness of his Heart / at the Malicious Power of his Enemies / Desired / these Words to be / engraven on his Tomb Stone: / Here lies One / Whose Name was writ in Water. 24 February 1821″


crossposted at Weekends in Paradelle
Posted by Ken Ronkowitz on Saturday, August 30, 2014

This is a great post. Thank you so much for sharing.