Cherry Blossom Haiku and the Seasons 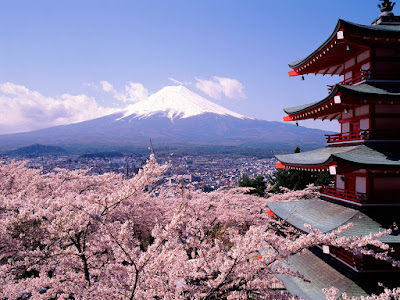 Under the cherry-blossoms
none are
utter strangers.

Cherry blossoms in evening.
Ah well, today also
belongs to the past.

Kigo is another aspect of traditional Japanese haiku, although it is not always present in modern and non-Japanese haiku. Kigo words are those associated with a particular season. It is a tradition that goes back to the mid-8th century in Japanese poetry and culture.

Rather than say the name of a season, it would usually be alluded to by kigo words, such as cherry blossoms to indicate spring.

In haiku, winter is traditionally the time of grief, distance and serenity, and might be indicated by "snow," "ice" or "bare tree."

crossing the river -
how pleasing with sandals
in my hand!

even after falling
its image still stands -
the peony flower

Autumn in haiku often depicts decay, the paranormal (ghosts and such), suspicion, regret, loss, and endings. The Moon, shadows and seasonal plants like persimmons and apples or insects like crickets could all indicate autumn.

In an old pond
a frog ages
while leaves fall

In the Japanese calendar, seasons traditionally followed the lunisolar calendar with the solstices and equinoxes at the middle of a season. So, the kigo words traditionall used may not match your own calendar of seasonal events in nature. The traditional Japanese seasons are Spring: 4 February–5 May; Summer: 6 May–7 August; Autumn: 8 August–6 November; Winter: 7 November–3 February.

With plum blossom scent,
this sudden sun emerges
along a mountain trail

Very brief -
Gleam of blossoms in the treetops
On a moonlit night.

From among the peach trees
blooming everywhere,
the first cherry blossoms.

From every direction
cherry blossom petals blow
into Lake Biwa

From all these trees –
in salads, soups, everywhere –
cherry blossoms fall

But not all blossoms come in spring, so when Basho writes:

Along the roadside
blossoming wild roses
in my horse’s mouth

he would mean it is late spring, possibly early summer.

When Yosa Buson writes about plum blosson we know it is spring and the cold that remains tells us it is early spring.

In nooks and corners
cold remains -
flowers of the plum

no bridge
and the sun going down -
spring currents

A woman
Reading a letter by moonlight -
Pear blossoms

Drinking up the clouds
it spews out cherry blossoms -
Yoshino Mountain.

In the moonlight,
the color and scent of wisteria
seems far away.

The man pulling radishes
pointed my way
with a radish

why cherry blossoms?
well, why not?
why japan?
why not?
and so on...

Yes, that is an Issa poem