Before I start knocking people's hats off 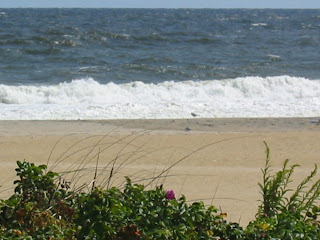 It's getting that time of the year when these words from Melville's Moby Dick come into my head...

"Whenever I find myself growing grim about the mouth; whenever it is a damp, drizzly November in my soul; whenever I find myself involuntarily pausing before coffin warehouses, and bringing up the rear of every funeral I meet; and especially whenever my hypos get such an upper hand of me, that it requires a strong moral principle to prevent me from deliberately stepping into the street, and methodically knocking people's hats off--then, I account it high time to get to sea as soon as I can. This is my substitute for pistol and ball."

I reread at least portions of Moby Dick every year. Been doing that probably since I first read the Classics Illustrated comic version ( as series that sent me on to many classics in the library) I always find something I missed. But that passage hits me when the weather in New Jersey finally warms up to the point that I think I can catch my beloved Jersey Shore on a breeze and I feel the need to drive south and just get my feet in the sand and watch the waves of the Atlantic Ocean. 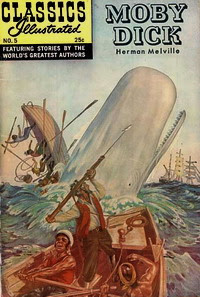 If you haven't read Moby Dick (ever or lately), you should give it a try. You can read it online at Project Guttenberg - though I can't really imagine anyone being able to do that, it's a great way to look at sections of the book.

If you don't want to pay for an audiobook version, you can also get download the free Librivox version online.

And if all else fails, at least watch the John Huston movie version with a script by Ray Bradbury instead of knocking off hats or the pistol & ball.
Posted by Poets Online on Sunday, May 06, 2007

This blog is tagged for an award. Check it out here.

Thanks for thinking of us as thinking. Rather than risk the wrath of Technorati, I will decline to participate. I do agree with them that chain posts too often lead to splogs and clog up the blogosphere, and to quote Groucho Marx, "I wouldn't want to belong to any club that would accept someone like me as a memeber."

blogs led to splogs,
resulting in clogs
in the blogosphere;
the technorati frowned
while others were busy
thinking about thinking,
yet metacognition
eluded Groucho
who waited for the word
day after day,
year after year
like all good poets

Thanks for the poetic comment. What a good idea. I'd love to see a poetry blog that only accepted comments that were poetry!

Call me Impatient. Some weeks ago-never mind how long precisely-having little inspiration or no ideas in my mind and nothing particular to inspire me in books, I thought I would explore a little and see the cyber parts of the world of poetry. It is a way I have of driving off writers’ block and regulating production…I consider it time to get to Poetsonline as regularly as I can. This is my substitute for my own muse and thoughts. There is nothing surprising in this. If Ken but knew it, almost all of the regulars in their degree, some time or other, cherish very nearly the same feelings toward the site with me. Alas, just as the ocean remains sometimes silent, so our site now is quiet and still. We wait and wait, wondering what it is that keeps our leader so still. Where can he be?

(With all due respect to H. Melville who would understand.)

The events at Virginia Tech (where my son graduated this past month) took a toll on me that I would not have expected.

Add to that another job change and a ton of work that I have let absorb my time and the result is no poetry.

Hoping to be back to a life with deliberate line breaks soon.