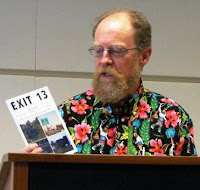 EXIT 13 magazine is one of the many small press poetry publications that keep poetry alive across the country. It features poets of all ages, writing styles and degrees of experience, focusing on where and how we live and what’s going on around us. This "poetry of place" is about geography, travel, adventure and the fertile ground of the imagination. It’s a travelogue in poetry, a reflection of the world we see, and a chronicle of the people we meet along the way.

Tom Plante started the magazine which he named after the Elizabeth exit off the New Jersey Turnpike where Tom once lived. It is a very much a labor of love and one-man operation by Tom who has edited and published the magazine since 1988. The annual issues also feature photos of exit 13 road signs contributed by correspondents. Plante sends a copy of the magazine to each photographer whose work is published.

Tom is reading submissions now for the 2013 issue which celebrates the magazine's 25th anniversary. He will be reading until the end of February. Email submissions with the poems within the email (no attachments) or snail mail to to EXIT 13, Box 423, Fanwood NJ 07023.

Tom Plante has personally been writing poetry for over forty-five years. “Poetry is necessary,” he says. “Poems are road maps for the soul; the GPS of a higher plane."

Before he moved to the New Jersey, Plante lived in the San Francisco Bay area of California. There, he worked with a friend to produce a small poetry magazine called Berkeley Works. Plante’s work in California gave him the inspiration to start his own literary magazine on the east coast.

The journeys of all the contributors gives us poems with a geographic point of view - a supermarket at the Jersey Shore, the Philadelphia Flower Show, souvenir shopping in Gallup, the Witches Market in La Paz, and buying a final round in Belgooly, Ireland.

There will be an EXIT 13 25th Anniversary Issue reading event October 15, 2013 as part of the Carriage House Poetry Series in Fanwood, NJ.
Posted by Ken Ronkowitz on 2/02/2013