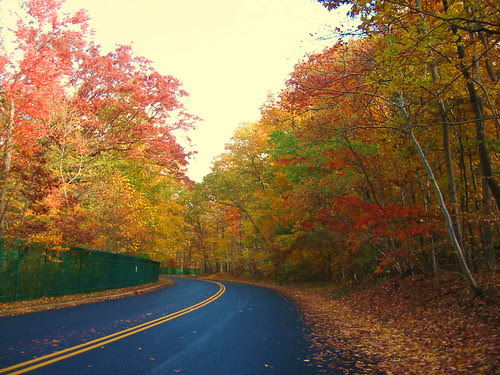 Right now, in the Northern Hemisphere, we are in early autumn and so you may be inspired to write about what you see in the season.

You could create quite a thick anthology just collecting poems on autumn. And the collection would include traditional takes on this season "When yellow leaves, or none, or few, do hang / Upon those boughs which shake against the cold" as Shakespeare writes in Sonnet LXXIII.

There are certain literary associations to the seasons, as in this short poem,"November Night," by Adelaide Crapsey.


Listen...
With faint dry sound,
Like steps of passing ghosts,
The leaves, frost-crisp'd, break from the trees
And fall.

Some of these associations have become clichés - such as, the Old Man Winter of old age, dying and death and the rebirth of spring.

I prefer poems that use the season as setting but go somewhere that I have not been in that season. In
"My Autumn Leaves" by Bruce Weigl the poet starts with a familiar place and familiar seasonal props like deer and apples.

and then goes back to find a younger self who has not left him.

who lives inside me still won’t go away.
The deer are ghosts who slip between the light
through trees, so you may only hear the snap
of branches in the thicket beyond hope.
I watch the woods for deer, as if I’m armed.

That departure was what appealed to me in reading "Another Autumn" by Adele Kenny from her collection, What Matters

. It is the model poem for our current writing prompt for October.

Like Weigel, she uses some of the familiars of the season - leaf-rot, chrysanthemums, chilling air and gaunt roses - but they are contrasted with a hidden passion of "sweat, and the smell of it" that leads us to a place where "trees on fire" are not just fall foliage.

On Adele's own blog, she offers a range of writing prompts from playing with form (such as in writing an "adeleanelle") and her own approach to what autumn brings.

And our own prompt this month? We will not limit ourselves to autumn. In "To Autumn," John Keats' writes about this "season of mists and mellow fruitfulness" but asks "Where are the songs of Spring?"

Your assignment this month is to write a poem that includes all four seasons. For example, you might take a place, a person or a situation through the seasons as a way of contrasting changes. (Perhaps, you can listen to Vivaldi's Four Seasons as you write.) You could take alternative views on those seasonal clichés. (Think of T.S. Eliot's view of spring/April as "the cruelest month" rather than a time of rebirth.)


You may be interested in reading an earlier version of Adele Kenny's poem "Another Autumn" to contrast it with the version published in What Matters which we used as the model this month.