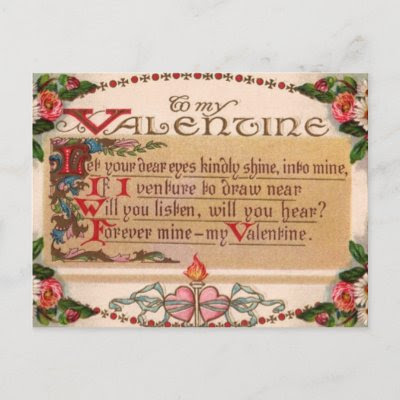 Perhaps today, there is a bit more poetry in the air...

Chaucer gets credit for establishing St. Valentine's Day as a romantic occasion, when in the 14th-century he wrote in "The Parlement of Foules" of a spring landscape "on seynt Valentynes day" where the goddess Nature watched as every kind of bird came before her to choose and seduce their mates.

In the early 15th century, the Duke of Orleans wrote a Valentine's poem to his faraway wife while held captive in the Tower of London.

Shakespeare mentioned the sending of Valentines in Ophelia's lament in Hamlet. And hundreds of years later, with the advent of cheaper postal services and mass-produced cards, the tradition of sending lacy love notes on the holiday was enormously popular with the Victorians. In 2010, more than 1 billion cards were sent worldwide.

As I wrote on an earlier Valentine's Day, I like the book of valentines by Ted Kooser. In 1986, Kooser (U.S. Poet Laureate 2004–2006) sent a Valentine's Day poem on a postcard to 50 women. Over the next three decades, he sent an annual poem to an increasing number of women (in 2007 there were 2,600 recipients). Valentines

collects those poems - and they are not all typical "love poems" or things you would find in a Valentine card.

This is just one of the leathery eggs
the scuffed-up, dirty turtle of the moon
buried early in spring, her eyes like stars
fixed on the future, and, inside its red skin,
whiteness, like all of the moons to come,
and marvelous, buttered with light.