The Thirst of Mary Oliver 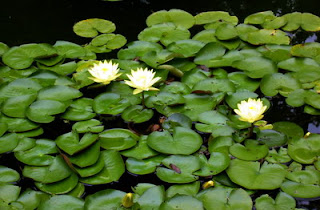 An evening of poetry with some friends this past week sent me looking into the poems of Mary Oliver again.

In Oliver's newest book, Thirst, there are 43 new poems. You'd expect to find poems about nature, and readers familiar with her work might also expect a kind of spirituality. As several reviewers have written, you will also find her exploring in this book grief and faith.

I returned to reading Oliver's poems after my friend, Leon, talked about how approaching her poems recently had been a kind of spiritual reading. Oliver recently lost her long time companion, and in this book she writes through and with her grief into a place that seems overtly spiritual, perhaps even religious.

Oh Lord of melons, of mercy, though I am
not ready, nor worthy, I am climbing toward you.

and in the poem, "Praying" she offers:


It doesn't have to be
the blue iris, it could be
weeds in a vacant lot, or a few
small stones; just
pay attention, then patch
a few words together and don't try
to make them elaborate, this isn't
a contest but the doorway
into thanks, and a silence in which
another voice can speak.

Patching a few words together into a prayer, or into a poem (I have long believed that almost all poems touch upon the writing of poetry) is, as she writes early in the book, her doing her life's work - "loving the world."

My other poetic companion last week, Susan, might call these Oliver's signature tropes (as Susan is currently deep into a thesis on the topic). That's not a bad path into the poems either, but I might have to walk down several definition roads to see tropes linguistically, as in music, philosophy or in the most obvious literary meaning.

As she spends a "Long Afternoon at the Edge of Little Sister Pond," Oliver writes:

Every day I walk out into the world
to be dazzled, then to be reflective


Belief isn't always easy.
But this much I have learned—
if not enough else—
to live with my eyes open.
I know what everyone wants
is a miracle.
This wasn't a miracle.
Unless, of course, kindness—

as now and again
some rare person has suggested—
is a miracle.
As surely it is.

For August, we ask for our new writing prompt that you try to write a natural prayer. You may use any definition of natural, any form of prayer, whether that be overtly religious or spiritual without any religious attachments. This term, "natural prayer," is not my own invention - Celan said: "Attentiveness is the natural prayer of the soul," so there are precedents for this type of poem.

If you have examples of poets who have written poems of this type, post a link in the comments below for others to follow.

Information on this writing prompt and poem submission is at poetsonline.org
Posted by Poets Online on 8/06/2007