Reading Through the Summer of Love 40 Years On

It has been 40 years since the "Summer of Love" in 1967 when a cultural focus turned to the Haight-Ashbury area of San Francisco and words like hippies and tie-dye entered the vocabulary.

The music of the Grateful Dead, Quicksilver Messenger Service, Jefferson Airplane, Country Joe & the Fish, Janis Joplin and others became associated with that place too.

Scott McKenzie sang that, "If you're going to San Francisco, be sure to wear a flower in your hair."

I was only 13 that summer. My dad had been sick for four years at that point and California seemed very far away, but very appealing.

There was a Time cover story, and I recall looking at photo spreads in Life magazine. Maybe that was signaling the explosion of general consciousness in America - or it was the beginning of the end already. In March 1966 Life's cover article was on this new psychedelic drug called LSD. It would be by that October.

The Gray Line bus company started "Hippie Hop" tours - "If you look to your right, you can see 710 Ashbury, home to Jerry Garcia & The Grateful Dead."

I didn't make it there until I had doubled my age and my wife and I did a Tijuana, Mexico to Wine Country journey through California. I don't recall much about the Haight which was pretty rundown at that point - at least locals were telling us it wasn't a place to really walk around as tourists at night. There were panhandlers and ex-hippies (or pretenders) who had seen much better days. I did the obligatory tour to see City Lights Books and Golden Gate Park.

I went again with a co-worker in 2002 when we were at a tech conference in Silicon Valley. We also did Alcatraz - a nice contrast.

We walked past the mural done by Charles Lobdell on the side of the Methodist Church on Belvedere. It's a huh blend of hippies around a tree and the faces of Martin Luther King, Jr., JFK, Harry Truman (huh?), and Julie, Linc & Pete from TV's The Mod Squad.

The San Francisco Gate did a piece on all this and spoke to a few poets of the time & place. Here's Lawrence Ferlinghetti.

"Before, up through the Human Be-In, the Haight was really sort of innocent, clean. I remember the early Jefferson Airplane, which was very lyrical. I was going to Fillmore quite a bit. (Poet) Andre Voznesensky and I performed in between sets of the Jefferson Airplane at the old Fillmore. Bill Graham generously offered us the stage. I was reading translations of Andre's poems. He was doing them in Russian. There was a light show going on.
I was onstage right next to Allen Ginsberg at the Human Be-In. I had an autoharp, which I was playing in those days. Luckily, they never allowed me to perform because it would've been a disaster. There was a sea of 10,000 faces. Don't know how many they actually counted. I remember, in the sunset, this lone parachutist descended on the crowd."

Billy Collins writes in The Trouble With Poetry

as a cold wave swirled around my feet
and the lighthouse moved its megaphone over the sea,
which is an image I stole directly
from Lawrence Ferlinghetti --
to be perfectly honest for a moment --

the bicycling poet of San Francisco
whose little amusement park of a book
I carried in a side pocket of my uniform
up and down the treacherous halls of high school.

(read the full poem at edutopia.org) 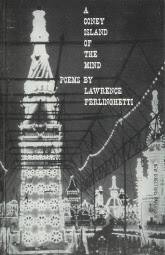 In the late 1950's as Billy wandered those high school hallways, I can imagine him with his paperback of A Coney Island of the Mind. I like the image of the book as an amusement park (again, stolen from the poet himself) that might help a uniformed kid escape high school and the 1950's.

I didn't really discover poetry until college, so I was probably carrying a novel for protection (Salinger, Hesse, Hemingway, Fitzgerald, Updike or Vonnegut would be a good guess).

January 1967 was that Human Be-In. It was one of the "Gatherings of the Tribes" (see The Byrds, "Tribal Gathering"). That particular one was in the Polo Fields in Golden Gate Park and brought together more than 10,000 people for music, poetry & Buddhist chants. Woodstock before Woodstock. No rain. The Hells Angels took care of lost children. (Pre-Altamont) Dr. Timothy Leary decreed the famous "turn on, tune in and drop out" and you listened. The guy was a professor from Harvard.

Another poet, Michael McClure: "I was sitting onstage next to Allen Ginsberg and Gary Snyder. Timothy Leary was up there, and Lenore Kandel. I sang one of my poems, "The God I Worship Is a Lion.'' It was the first great congregation of the young seeker people, known as the counterculture, who were drawing together to create their own huge family, and to celebrate it in their own huge tribe, and to celebrate it with music and dance and song and psychedelics and some real good political things."

Levi Asher has some great pages online about the Beat poets and that period. Reading it reminded me of a backpack full of books I read back then.

I recall John Barth's Giles Goat-Boy (boy raised by goats battles an evil computer system on a college campus) and The Magus - John Fowles (innocent collegiate Brit who is subjected to an elaborate demonstration of ancient mythological references on an isolated Greek island) and
Richard Farina's Been Down So Long It Looks Like Up To Me - loved the title and by the time I read it Farina had been killed in a motorcycle accident during a party celebrating the 21st birthday of his wife, folksinger Mimi Farina.

Asher mentions that a big book of 1966 was In Cold Blood by Truman Capote, who would famously mock Jack Kerouac's On The Road and his spontaneous writing technique - "That's not writing, that's typing". I couldn't get through either of those books. I also didn't have a copy of the little Quotations of Chairman Mao which was generally for wannabe revolutionaries. Revolution was appealing, but what Mao was doing to China was hardly Flower Power. Most people I knew who owned the book had never read it.

Michael McClure's The Beard and Lenore Kandel's The Love Book" were banned (sort of) books, but your mom might have been reading the "dirty" Valley of the Dolls" by Jacqueline Susann.

I did read and love Flowers for Algernon by Daniel Keyes which was later made into the movie Charly and about ten years later I would teach the book and show the film to my own students wandering down their own treacherous halls.

The book I probably carried as my freak flag was Richard Brautigan's Trout Fishing In America which I didn't totally understand, but really liked.

I had to read for college classes a few years later Edward Abbey's Desert Solitaire, The Electric Kool-Aid Acid Test which was what I knew about The Merry Pranksters and that scene as told by Tom Wolfe, Vonnegut's Welcome to the Monkey House and Updike's Couples which I thought was a pretty hot book to have assigned (might have been the same class in 1973 where we read Jong's Fear of Flying). By the time I took the bus into New York City with some classmates to see Hair on Broadway it felt like the period was over and when the movie version came out in 1979, it seemed so old.

The free Summer of Love 40th party will be held September 2nd in Golden Gate Park. Performances include: Ray Manzarek (the Doors), Country Joe McDonald (Country Joe and the Fish), Canned Heat, Michael McClure, New Riders of the Purple Sage, and The Charlatans.

Supposedly it will be webcast too. Info at 2b1records.com

(Link suggested by commenter below)
Music from the Summer of Love