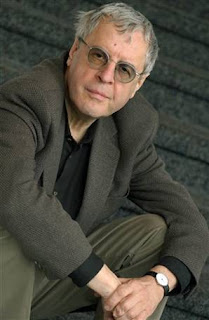 Charles Simic was named the 15th poet laureate of the U.S. by the Librarian of Congress this monthly. He succeeds Donald Hall. Laureate appointments can be one or two years and come with a $35,000 annual stipend.

The same day it was announced that the American Academy of Poets had given him its Wallace Stevens Award for "outstanding and proven mastery" of the art of poetry.

Simic was born in Belgrade, Yugoslavia and came to the U.S. with his family in 1954, was drafted into the Army in 1961 and received a bachelor's degree from New York University in 1966.

In 1967 he published his first full-length collection, What the Grass Says. He has published more than 60 books in the U.S. and abroad, including 18 books of poetry. He began teaching at the University of New Hampshire in 1973, where he is professor emeritus of creative writing and literature.

The actual title is Poet Laureate Consultant in Poetry to the Library of Congress. He will actually officially begin his appointment as poet laureate with a speech at the library's National Book Festival on Sept. 29 and a reading of his work Oct. 17 at the library's annual literary series.

How much death works,
No one knows what a long
Day he puts in. The little
Wife always alone
Ironing death's laundry.
The beautiful daughters
Setting death's supper table.
The neighbors playing
Pinochle in the backyard
Or just sitting on the steps
Drinking beer. Death,
Meanwhile, in a strange
Part of town looking for
Someone with a bad cough,
But the address somehow wrong,
Even death can't figure it out
Among all the locked doors...
And the rain beginning to fall.
Long windy night ahead.
Death with not even a newspaper
To cover his head, not even
A dime to call the one pining away,
Undressing slowly, sleepily,
And stretching naked
On death's side of the bed.

What is fascinating about Mr. Simic is that he didn't begin learning English until he was 15 when he moved to New York:

Since most of us think in words and think in our native language, it's amazing to think of how a poet adapts his or her inner ear to the nuances, the rhythms, the subtleties of a new language and then goes on to write wonderful poems.

Simic isn't alone in this. There are others who have done so, and certainly poets who write translations do something quite similar. Still, it's wonderful that he has been chosen as our new Poet Laureate not just because he can write well, but also because he sets a good example of how immigrants to this country give so much to us.