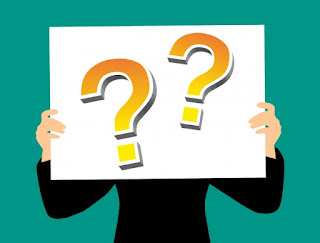 Poets get asked odd questions. They often come after giving a reading. There are the unanswerable questions ("Why do you write poetry? Can everyone be a poet?") and the ones you don't want to answer ("So, what is that last poem actually supposed to be about?") Some of the most unusual ones that I've heard come from students after workshops or readings. Younger students often ask "Do you make money writing poems?" I had a high school student ask me "If I say it's a poem, it's a poem. Right?"
I suspect a good number of poets have written about being asked a poet question. We did this topic as a prompt in 2014 using two poems by Aimee Nezhukumatathil: "Are All the Break-Ups in Your Poems Real?" and "Dear Amy Nehzooukammyatootill." I had forgotten that earlier prompt and was working on the same topic for our May issue. I found two poems as models, so I'm going to share them anyway.
Eve Merriam's poem, "Reply to the Question: 'How Can You Become a Poet?'" addresses one of those unanswerable questions. Well, there are answers "Get an MFA," "Just write," and "Read everything" are all ones I have heard. Merriam gives a more poetic reply.
take the leaf of a tree
trace its exact shape
the outside edges
and inner lines
memorize the way it is fastened to the twig
(and how the twig arches from the branch)
how it springs forth in April
how it is panoplied in July
by late August
crumple it in your hand
so that you smell its end-of-summer sadness
chew its woody stem
listen to its autumn rattle
watch it as it atomizes in the November air
then in winter
when there is no leaf left
invent one
The second poem I remembered from is "Valentine for Ernest Mann" by Naomi Shihab Nye.
It begins:
You can’t order a poem like you order a taco.
Walk up to the counter, say, “I’ll take two”
and expect it to be handed back to you
on a shiny plate.
Still, I like your spirit.
Anyone who says, “Here’s my address,
write me a poem,” deserves something in reply.
You can see and hear Naomi read the poem.
Have you had a strange question asked of you as a poet? Share in a comment. Answers not required.
Visit our website at poetsonline.org
Posted by Ken Ronkowitz on 5/14/2021

Poets get asked odd questions. They often come after giving a reading. There are the unanswerable questions ("Why do you write poetry?...