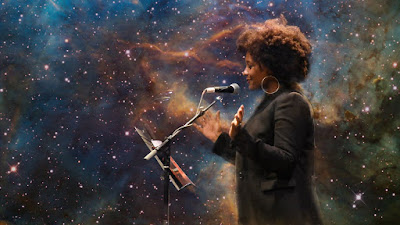 Tracy K. Smith has been named the next poet laureate of the United States and will begin her role this fall, succeeding Juan Felipe Herrera.

Smith is a professor at Princeton University, where she directs the creative writing program.

She has written three poetry collections, including the Pulitzer Prize–winning Life on Mars , The Body’s Question and Duende, all from Graywolf Press. She has also written a memoir, Ordinary Light  (Knopf, 2015).

“As someone who has been sustained by poems and poets, I understand the powerful and necessary role poetry can play in sustaining a rich inner life and fostering a mindful, empathic and resourceful culture,” said Smith in the announcement from the Library of Congress. “I am eager to share the good news of poetry with readers and future-readers across this marvelously diverse country.”


Tracy K. Smith reads her poem "Wade in the Water," which will be published in a book of poetry in 2018.


Tracy K. Smith was twenty-two when her mother died in 1994. In The Body’s Question, her first book of poetry, she writes about that loss.

In the memoir, Ordinary Light, she also considers the loss of her mother and of her father, who died in 2008. That was also the year her daughter, Naomi, was born.

Life on Mars  in some ways is an elegy for her father who worked on the Hubble Space Telescope program.

... sealed tight, so nothing escapes. Not even time,
Which should curl in on itself and loop around like smoke.
So that I might be sitting now beside my father
As he raises a lit match to the bowl of his pipe
For the first time in the winter of 1959...


Smith reads “Digging” by Seamus Heaney, the poem she feels “invited her to start writing poetry,” and from “My God, It’s Full of Stars,” a poem she wrote about her father.

...Perhaps the great error is believing we’re alone,
That the others have come and gone — a momentary blip —
When all along, space might be choc-full of traffic,
Bursting at the seams with energy we neither feel
Nor see, flush against us, living, dying, deciding...

(excerpts from "My God, It's Full of Stars")


Tracy graduated from Harvard College in 1994 with a BA in English and American Literature and Afro-American Studies. She earned an MFA from Columbia University.

She taught at Medgar Evers College in Brooklyn, New York, and at the University of Pittsburgh before joining the faculty at Princeton University in 2005.


Tracy K. Smith discusses her interest in science-fiction and the research for her book, Life on Mars

Smith lives in Princeton with her husband, Raphael Allison, and their three children. Her twin sons, Atticus and Sterling, were born in 2013.