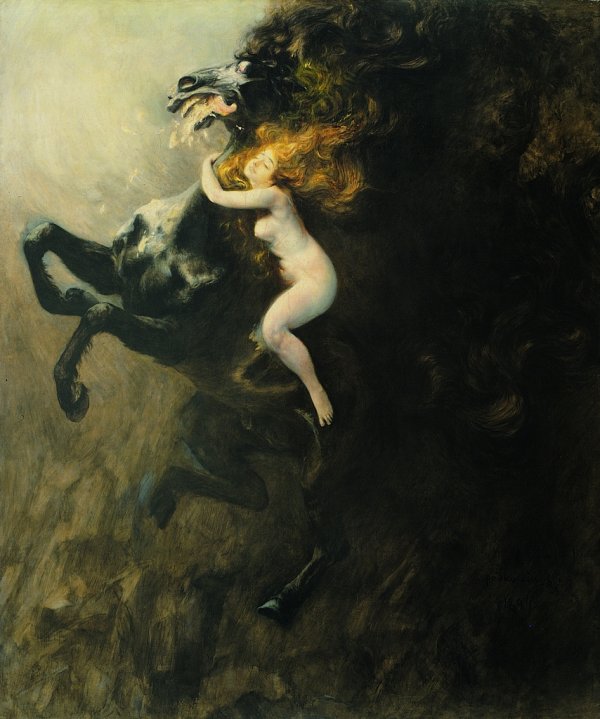 Ecstasy (1894), a painting by Władysław Podkowiński, depicting a ride similar to that described in "Ariel"
www.culture.pl, Public Domain


Listening to a recent program from the Poetry Off the Shelf podcast, I am reminded that Ariel, Sylvia Plath's posthumous collection, is 50 years old.

Ariel was the second book of Sylvia Plath's poetry to be published, and was originally published in 1965, two years after her death by suicide.

Plath is credited with being a pioneer of the 20th-century style of writing called confessional poetry. Her poem "Daddy" is one of the best-known examples of this genre.

The poems in the 1965 edition of Ariel are filled with frightening psychic landscapes, and were very different from her first collection, Colossus.

In 1963, Plath's semi-autobiographic novel The Bell Jar was published under the pseudonym "Victoria Lucas" (and reissued in 1966 under her own name).

In the collection's title poem, a woman is riding her horse in the country at dawn. I recall reading the poem in a college class and the professor telling us that there were three Ariels to consider.

One was Sylvia Plath's own horse, which she loved to ride. Second, was that androgynous sprite from Shakespeare's The Tempest which I had read that same semester and quite loved. The third allusion, if she intended it, was to Jerusalem, which was also called Ariel in the Old Testament.

I don't know that I have even now completely understood her poetic "Ariel."

In the 1965 edition of Ariel, her husband, the poet Ted Hughes, had changed Plath's chosen selection and arrangement by dropping twelve poems and adding twelve others.

He also asked the poet Robert Lowell to write an introduction because Plath cited Lowell's book Life Studies as having had a profound influence over the poetry she was writing at the time.

Another influence was Anne Sexton who was similarly exploring some of the same dark and personal subjects that Plath was using in Ariel.

In 2004 a new edition of Ariel was published which for the first time restored the selection and arrangement of the poems as Plath had left them.

This edition has a foreword by her daughter Frieda Hughes.