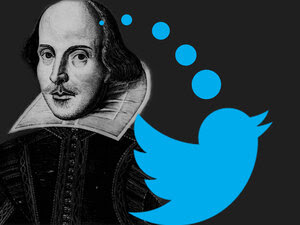 Another piece of technology is mixing with poetry.

If that is poetry, it's technological "found poetry."  Those rhyming couplets written in iambic pentameter come from Twitter and were found by an algorithm. Yes, those ten-syllable lines of alternating emphasis that we learned about in school when we studied Shakespeare, sonnets and blank verse have been pulled from tweets by a program called Pentametron.

Pentametron (@pentametron on twitter, which you can follow without joining twitter itself)  is set up to monitor public tweets, pull out those in iambic pentameter, look for pairs that rhyme, and then retweet them as a couplet.

The site's motto is:
"With algorithms subtle and discrete
I seek iambic writings to retweet."

Is it poetry? That's your call. But it is interesting that these random couplings sometimes produce logical groupings.

I haven't got the mindset anymore
the tiny inner voice becomes a Roar!
Another boy without a sharper knife.
Closed eye and hoping for a better life

This isn't the first poetry via Twitter site that I have written about. Earlier there was the "Longest Poem in the World" which is still running.

In an NPR interview, the creator of Pentamentron, Ranjit Bhatnagar, said that he had been "... inspired by the exquisite corpse games of the surrealists" and realized that Twitter could supply "an endless waterfall of tweets."

I wanna be a news reporter, yo
I never listen to the radio

I pay attention to details okay.
Its gonna be a busy day today :(


and others are... well, not so clearly connected

She's like a rainbow, painted black and white.
Not going to the ball tomorrow night.

Of course, a lot of people who don't regularly read poetry might say that "real" poems often don't make sense to them, so...

Pentrametron generates 15 to 20 couplets of 140-characters or less on an average day.