All poetry is found somewhere, or in something. That's what inspiration is all about. The writing of "Found Poetry" formalizes that mostly accidental practice.

For this month, Poets Online is asking for found poems as submissions.

Not only can this technique serve as an antidote to writer's block, but it can also offer you fresh topics, language, images, and observations.

You can use newspaper articles, headlines, advertisements, junk mail, letters from others and a thousand other starting points.

In the samples I have put on the prompt on our main site (two of them are my own), the sources were a newspaper article in the cooking section and an email.

Here's a found poem that came from a magazine ad.

Depression isolates you
all alone in the world.
Suddenly,
for no apparent reason -
trouble sleeping,
irritable,
trouble feeling pleasure,
lose your appetite.
Symptoms.
Too much to handle.
Everyday life
may drop.

And someone you love
is blossoming again.

(found in a magazine ad for the drug Prozac)

Here is another found poem. Reading it without knowing the source might make it work better.


TO THE HAPPINESS OF MAN

Infidelity does not consist in believing,
or in disbelieving.

It consists in professing to believe
what one does not believe.

Priests and conjurors
are of the same trade,

and the most formidable weapon
against errors of every kind

I have used that poem with students and teachers as a way to open a discussion that might deal with happiness, belief or reason. I reveal that it is a found poems and that all the words come from a piece they are going to read by Thomas Paine. It makes the point that some of his lines, especially when read in isolation and with the focus we give a line of poetry, are profound. Later, I will have them do the same kind of thing with another reading - simply pulling out selected lines and phrases that are striking (whether or not we ever create poetry from them).

The rules for this month's writing prompt?

In its purest form, a found poem uses only the words found in the source - no changing verb forms, making plurals etc. You can add or subtract capitalization and punctuation. And your most powerful tools, next to your careful selection and ordering, are line breaks and stanzas. I would also allow that adding an original title can sometimes make a huge difference in the way the poem will be read.

You must identify the original source either at the beginning or end of the poem. (Sometimes putting it at the top ruins some poetic tension.) If the source is online, you could give a link for the reader to follow.

Found poetry is a great lesson for students because it forces them to focus on how word selection, titles and layout change the meaning of the words. Context changes everything - a good lesson for writer and reader.

There's a nice "lesson plan" on the Library of Congress website for using their vast collection in the American Memory collection (such as the Life Histories collected from 1936-1940) as starting places for your found poems.

With students, I have sometimes added additional levels of complexity - like asking that they find rhymes in the original and use them, or construct a poem in a form (sonnets etc.). You might raise the bar for your own attempt in the same way.

Here's an example poem from the Library of Congress site:


Found Poetry Based on Elsie Wall

Rocks in her chair between supper and dinner,
thirty-two but looks forty-five.
Never learned how to chop in the garden,
never learned right how to pay at the store.

Rocks in her chair between supper and dinner,
children in rags lined up on the porch:
all she can count, all she can figure.
How can she clothe them to send them to school?

Daughters with bright eyes of Jean Harlow,
hang Jesus and movie stars framed on the walls.
Six dollars a week for six mouths in the family:
How will they work, get out of this town?

Jim works in the cotton mill, tends crops in the garden.
Elsie can cook if there's food in the house.
Pots catch the flow from the rainy roof leaks.
Rocks on her porch in rain or in fine. 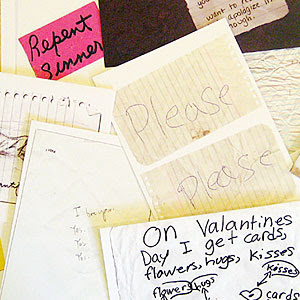 An interesting lost and found project that has resulted in a magazine, several books and a website is Found Magazine.

They collect stuff (love letters, birthday cards, kids' homework, to-do lists, ticket stubs, poetry on napkins, doodles) that they and others have found (and submit to the magazine) as a way of getting a glimpse into someone else's life.

You might find some objects on their site to inspire your own found poems.

Their bound collections include Found Magazine #7: Feel A Connection

,  Requiem for a Paper Bag: Celebrities and Civilians Tell Stories of the Best Lost, Tossed, and Found Items from Around the World, and anthologies like Found II.

Here's an example of a lost and found item from their site. 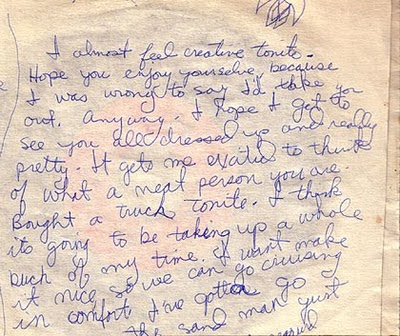 This 45 RPM record sleeve was found inside a used copy of Bob Dylan's Greatest Hits Vol. 2 that someone bought in a used record store.

Did the writer plan to give her that record? Did he give it to her and she sold it at the used record store, not even caring to keep the note (but also not destroying it)?

check out this poetry found in Google voice messages
http://ow.ly/16Sio