was the inspiration for our March prompt.

Did you notice the new poll on the top right of this blog? I am asking you "What types of prompts inspire you to write?" Topics is a common one.

I used three model poems on the site this month that you should read there to make the point that poets have several takes on our avian topic. Birds appear in the anthology as admirable, terrible, like humans, unlike humans, poetic, mythical, and humorous.

I might caution you to avoid the trap that anthropomorphism offers. (That's the attribution of human characteristics to non-human creatures.) It a well-accepted art and storytelling technique. Animals, plants, and forces of nature are commonly personified in poems. It has ancient roots in most cultures, especially in fable traditions.

in which a thing or abstraction is represented as a person. So, that is one approach you might take for this prompt, but when taken too far, a poem sounds more like a children's story than a poem.

And why have so many poets gone to the birds for inspiration? Song certainly has something to do with it. With poets probably first being singers, birds were natural compatriots.

When I first discovered in some classroom those poetic collective nouns, the avian ones were particularly appealing: a murder of crows, a murmuration of starlings, a parliament of fowls.

I
Among twenty snowy mountains,
The only moving thing
Was the eye of the blackbird.

II
I was of three minds,
Like a tree
In which there are three blackbirds.

XIII
It was evening all afternoon.
It was snowing
And it was going to snow.
The blackbird sat
In the cedar-limbs.

used birds as symbols in The Hawk in the Rain

and in Crow: From the Life and Songs of the Crow.

Crow realized there were two Gods --
One of them much bigger than the other
Loving his enemies
And having all the weapons.


Hughes does something that William Blake and others did before him - a kind of new Gospel through the Crow. The crow plays an important role as a totem bird in many Native American story traditions.

Emily Dickinson writes that "Hope is the thing with feathers / That perches in the soul" but she also sees another side in her "A Bird Came Down."


A bird came down the walk:
He did not know I saw;
He bit an angle-worm in halves
And ate the fellow, raw. 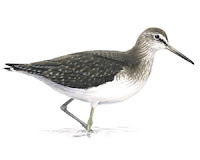 
The world is a mist. And then the world is
minute and vast and clear. The tide
is higher or lower. He couldn't tell you which.
His beak is focused; he is preoccupied,

Let's hope that we see a variety of species and approaches this month as Spring returns and probably bring some birds back to your area.