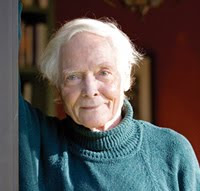 I had read poems by W.S. Merwin before I actually heard him read in person. But seeing and hearing him at one of the Geraldine R. Dodge Poetry Festivals is what really got me to get his books and read the poems.

Last June, he did an interview on the Bill Moyers Journal and talked about that Dodge appearance which Moyers recorded and turned into several books and videos, including Fooling With Words.

Merwin’s book, The Shadow of Sirius, won the 2009 Pulitzer Prize in poetry, and it is one of my favorites of his. Maybe that's because much of it is poetry of later life - loss, memory, time - and the backward and forward of what we see, feel, and remember.

This childhood memory at the intersection of past and present is part of the poem “Still Morning."

This book that is named for the Dog Star has a good number of poems about Merwin’s own dogs. His poem, “Dream of Koa Returning,” has Merwin walking and looking at the river and trees

In that interview, Moyers wondered:

Now, Sirius is the dog star, the most luminous star in the sky, twenty-five times more luminous than the sun. And yet, you write about it's shadow. Something that no one has never seen. Something that's invisible to us. Help me to understand that.

That's the point. The shadow of Sirius is pure metaphor, pure imagination. But we live in it all the time. We are the shadow of Sirius. There is the other side of-- as we talk to each other, we see the light, and we see these faces, but we know that behind that, there's the other side, which we never know. And that — it's the dark, the unknown side that guides us, and that is part of our lives all the time. It's the mystery. That's always with us, too. And it gives the depth and dimension to the rest of it.

In the poem "The Nomad Flute"

and Moyers asked, "What — how do you carry with you what you do not know?"

And there is this poem, which I am selfishly attracted to because it is about a teacher and teaching.

and then where did she go


from The Shadow of Sirius (Copper Canyon Press)

Much good luck to Mr Merwin in his appointment as poet laureate. You Americans are lucky. The committee, or whoever, couldn't have made a better choice. I say 1 year renewable, yes definitely renewable! In the UK we're still in the Victorian age, or not much moved on. It's basically 10 years of HRH birthday poetry for a few bottles of royal plonk. Not long ago it was ven worse; a life sentence.