17th Annual Winter Poetry and Prose Getaway in Cape May

It's hard to believe that Peter Murphy has been doing this for 17 years. Not your typical writers' conference.

The 17th Annual Winter POETRY & PROSE GETAWAY in Cape May is right on the on the oceanfront in Historic Cape May, New Jersey with special guests MARK DOTY & STEPHEN DUNN on January 15-18, 2010 (MLK weekend). 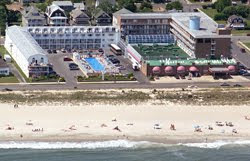 's Fire to Fire: New and Selected Poems won the National Book Award for Poetry in 2008. His seven other books of poems have been honored by the National Book Critics Circle Award, the T.S. Eliot Prize, the Los Angeles Times Book Prize, and other awards. He's also the author of four books of nonfiction prose, most recently Dog Years, a New York Times bestseller, which won the Israel Fishman Nonfiction Award from the American Library Association.

has published fifteen volumes of poetry, including Different Hours, which was awarded the 2001 Pulitzer Prize for Poetry, and the recently released What Goes On, Selected & New Poems: 1995-2009 (Norton, 2009).

He has received awards and fellowships from the American Academy of Arts and Letters, The Guggenheim Foundation, the National Endowment for the Arts, the Levinson Prize from Poetry magazine, an Academy Award in Literature from The American Academy of Arts & Letters, as well as Fellowships from the Guggenheim and Rockefeller Foundations, three NEA Creative Writing Fellowships, a Distinguished Artist Fellowship from the NJ State Council on the Arts, the Theodore Roethke Prize from Poetry Northwest, the James Wright Prize from Mid-American Review and many others.

A new and expanded edition of his book of essays, Walking Light, was published in 2001.

He is Distinguished Professor of Creative Writing at Richard Stockton College of New Jersey, but spends most of his time these days in Frostburg, Maryland with his wife, the writer Barbara Hurd.

For workshop descriptions, faculty bios, registration information and to learn about our other programs in New Hampshire and Wales , check out the website at
www.wintergetaway.com
Posted by Ken Ronkowitz on 10/26/2009