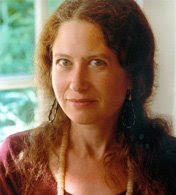 In descriptions of Jane Hirshfield and her poetry, you are likely to hear mentioned mindfulness about our world, plants, animals, the heart and the mind. She is a student of Zen and that influence sits quietly under many of her poems. Since she does not make it a public part of her poetry, I will not use it as part of our prompt.

"For quite a few years I didn't allow the practice part of my life to become known -- not because it isn't important to me but because it is private. Not everything belongs in the public realm. In any case I'm not an overtly Buddhist poet in the way that, for example, Allen Ginsberg was. But when I wrote the author's biographical note for Women in Praise of the Sacred

, I felt I should disclose my own interest and background in the realm of spiritual experience. That information doesn't appear in any of the poetry-book biographies, though, because it doesn't belong there; knowing it may add something, but it's not the governing fact for a reader of my work." from The Atlantic

If you have been able to see and hear her read, you know of her gentleness. If not, take a look at the video below of her reading.

In the poem I chose for this month's prompt, "This Was Once A Love Poem," I think many readers will (as I did) naturally begin to substitute as they read a person (probably "she" or "I") in place of the "poem" speaking within the poem.

It surprised me to find that poem at the Academy of American Poets website as part of a group titled "Poems for Breakups and Divorce." I had not really read the poem as being about a breakup, though I can see how it might fit into that group.

I read the poem as one about transformation, particularly through growing older. In another poem, she says:

Without transformation,
yours the role of the chorus, to whom nothing happens.
The living step forward: choosing to enter, to lose.

Our prompt for July steals directly from Hirshfield's opening. Write a poem that uses as its title or first line a variation on "This was once a love poem." You can maintain the idea of the changed poem ("This was once a sonnet to my wife...") or directly insert the person ("I/she/he was once a...") into the line.

It should be about change and the recognition of what once was, and what now is. It could be a poem that would fit nicely onto that "Breakups and Divorce" page. Or it could go ars poetica and be a poem about itself and how the poem has changed.

I like that in Hirshfield's verse "the poem" once had "no fold of skin softened" and "no pad of yellow fat." I wish the poem fought a bit harder to resist the changes, but it gently accepts no longer being a love poem.


Jane Hirshfield reads "Vinegar and Oil," "Vilnius," "A Cedary Fragrance," "A Day Is Vast" and "The Bell Zygmunt" at the 2008 Dodge Poetry Festival.

“Vilnius” and “The Bell Zygmunt” appear in her 2007 book After

. “A Cedary Fragrance” appears in Given Sugar, Given Salt

. “A Day Is Vast” and “Oil and Vinegar” will appear in her next collection.
Posted by Ken Ronkowitz on Wednesday, July 08, 2009

Any chance of extending the deadline a bit? This is prime time when people are away in summer. Maybe just another week? August 10th?

Too late - new prompt is up and running.