Poetry and the Presidency 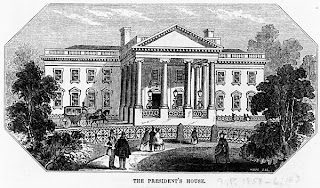 I read a post on the Library of Congress blog that in 1982, when Barack Obama was a 19-year-old student at Occidental College, he had 2 poems published in the spring issue of the school's literary magazine of the time.

Here's one of those poems:

Under water grottos, caverns
Filled with apes
That eat figs.
Stepping on the figs
That the apes
Eat, they crunch.
The apes howl, bare
Their fangs, dance,
Tumble in the
Rushing water,
Musty, wet pelts
Glistening in the blue.

Obama is taking on a job that is incomprehensibly difficult to most of us. I'm delighted that he even wrote poetry as a student, and I hope that it may still have a place in his life as reader and writer. But I'm surprised by the "analysis" that these two poems have been given in the press and online lately. (I know some of you are saying that I'm naive for even being surprised.)

The second poem, "Pop," is reported to be about his maternal grandfather, Stanley Dunham.

Sitting in his seat, a seat broad and broken
In, sprinkled with ashes,
Pop switches channels, takes another
Shot of Seagrams, neat, and asks
What to do with me, a green young man
Who fails to consider the
Flim and flam of the world, since
Things have been easy for me;
I stare hard at his face, a stare
That deflects off his brow;
I’m sure he’s unaware of his
Dark, watery eyes, that
Glance in different directions,
And his slow, unwelcome twitches,
Fail to pass.
I listen, nod,
Listen, open, till I cling to his pale,
Beige T-shirt, yelling,
Yelling in his ears, that hang
With heavy lobes, but he’s still telling
His joke, so I ask why
He’s so unhappy, to which he replies...
But I don’t care anymore, cause
He took too damn long, and from
Under my seat, I pull out the
Mirror I’ve been saving; I’m laughing,
Laughing loud, the blood rushing from his face
To mine, as he grows small,
A spot in my brain, something
That may be squeezed out, like a
Watermelon seed between
Two fingers.
Pop takes another shot, neat,
Points out the same amber
Stain on his shorts that I’ve got on mine, and
Makes me smell his smell, coming
From me; he switches channels, recites an old poem
He wrote before his mother died,
Stands, shouts, and asks
For a hug, as I shink, my
Arms barely reaching around
His thick, oily neck, and his broad back; ‘cause
I see my face, framed within
Pop’s black-framed glasses
And know he’s laughing too.

Someone asked Harold Bloom at Yale University to review it and he said it was “not bad—a good enough folk poem with some pathos and humor and affection... It is not wholly unlike Langston Hughes, who tended to imitate Carl Sandburg" and further says it is much superior to the poetry of former President Jimmy Carter whom Bloom calls "literally the worst poet in the United States."

I never knew critics were so interested (or tough!) on poetry in college literary magazines.

I picked up a book of Jimmy Carter's poetry in the library a few years ago, and I recall liking a few poems about fishing that were there. Great poetry? No. The worst poetry? Definitely not.

Presidents taking their chances on writing poetry is not without precedent.

How about this acrostic poem by George Washington?

From your bright sparkling Eyes, I was undone;
Rays, you have, more transparent than the sun,
Amidst its glory in the rising Day,
None can you equal in your bright array;
Constant in your calm and unspotted Mind;
Equal to all, but will to none Prove kind,
So knowing, seldom one so Young, you'l Find
Ah! woe's me that I should Love and conceal,
Long have I wish'd, but never dare reveal,
Even though severely Loves Pains I feel;
Xerxes that great, was't free from Cupids Dart,
And all the greatest Heroes, felt the smart.

John Tyler wrote several poems that have survived. One was written when his three-month old daughter Anne died in July 1825. Here are the opening stanzas to that elegy:

Oh child of my love, thou wert born for a day;
And like morning's vision have vanished away
Thine eye scarce had ope'd on the world's beaming light
Ere 'twas sealed up in death and enveloped in night.

Oh child of my love as a beautiful flower;
Thy blossom expanded a short fleeting hour.
The winter of death hath blighted thy bloom
And thou lyest alone in the cold dread tomb. . . . [4]

And we also have the precedent for the inclusion of poetry at Presidential inaugurals. Robert Frost recited "The Gift Outright" (PBS transcript) at John F. Kennedy's 1961 inaugural. (Frost actually that poem from memory because he was unable to read the text of "Dedication" (PBS transcript) which he had written for the occasion. (video of Frost reading "The Gift Outright" at Kennedy's inauguration)

Maya Angelou read "On the Pulse of Morning" at Bill Clinton's 1993 inaugural. (video of the reading) James Dickey read ''The Strength of Fields'' at Jimmy Carter's 1977 inaugural gala at the Kennedy Center.

Are any of you with me on thinking that having a President that reads, writes or at least has written and read poetry at some point is a GOOD thing?
Posted by Poets Online on Tuesday, November 18, 2008

Thanks for this interesting presidential poetry round-up!