The Paradox of Poetry Prompts

“The ordinary man believes he is free when he is permitted to act arbitrarily, but in this very arbitrariness lies the fact that he is unfree.” - Hegel 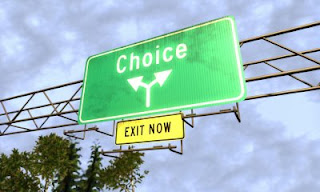 Hegel called it "negative infinity.” The distance between those who recoil from choice and those who have no choice at all is not very great.

So what did I do? I offered a lot of prompt choices for November poems via another site that was offering a prompt a day for 30 days. That should give readers 30 times the options of previous months when there was one measly prompt you had to address.

Do you think my inbox was flooded with submissions? Nope. Two submissions so far (plus 11 poems that don't address ANY prompt except the one they heard in their head).

Are you out there poets? Overcome by choices or overcome by the financial crisis, or overwhelmed by the Obama victory or overstuffed by Thanksgiving?

There are just a few days remaining for our November prompt: choose any one of the prompts that Robert Brewer has posted this month. When you submit your poem to Ports Online, be sure to include in the email an indication of what the prompt was that you used.
Posted by Ken Ronkowitz on Friday, November 28, 2008

If at first, you don't succeed, try, try again. Okay. I admit I am technically challenged which probably explains why my responses to your blog don't seem to reach you.

Perhaps Hegel was right about this choice thing. Alot of us are overwhelmed with life in general right now, but what better way to relieve some stress than to write a poem!!!!

I'm glad to learn that I was not the only one to misunderstand your current prompt. I know I have a few short circuits, but it does make life interesting.

I am actually working on two poems that would fit the bill. I generally post at the last minute anyway.

I don't wish to be known as anonymous. My name is Marie Antoinette and some day I would like to write a poem about cake.

Happy belated Thanksgiving to all.

You can add any name you wish when you comment. And all comments make it onto the blog - unless they are spam or really mean-spirited. (I call that "editorial control.")

Let me add my op that the November prompt was clear & simple. Pick a prompt, write a poem. I don't see the confusion.