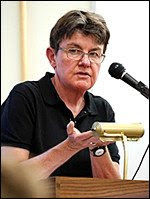 and has won numerous award including the Ruth Lilly Poetry Award, a National Endowment for the Arts Fellowship, 2004 Guggenheim Fellowship, an Ingram Merrill Award, the 2000 Union League Poetry Prize and the Maurice English Poetry Award and four Pushcart prizes.

Ryan was born in 1945 in San Jose, California. She received both bachelor’s and master’s degrees from the University of California, Los Angeles. Since 1971, Ryan has lived in Marin County. Her partner of 30 years is Carol Adair.

For more than 30 years, Ryan limited her professional responsibilities to the part-time teaching of remedial English at the College of Marin in Kentfield, Calif., thus leaving much of her life free for "a lot of mountain bike riding plus the idle maunderings poets feed upon." She said at one point that she has never taken a creative writing class, and in a 2004 interview in The Christian Science Monitor, she noted, "I have tried to live very quietly, so I could be happy."


Who would be a turtle who could help it?
A barely mobile hard roll, a four-oared helmet,
She can ill afford the chances she must take
In rowing toward the grasses that she eats.
Her track is graceless, like dragging
A packing-case places, and almost any slope
Defeats her modest hopes. Even being practical,
She’s often stuck up to the axle on her way
To something edible. With everything optimal,
She skirts the ditch which would convert
Her shell into a serving dish. She lives
Below luck-level, never imagining some lottery
Will change her load of pottery to wings.
Her only levity is patience,
The sport of truly chastened things.

'Turtle" is from Kay Ryan's Flamingo Watching, Copper Beach Press, 1994 and is also available at Poetry 180.