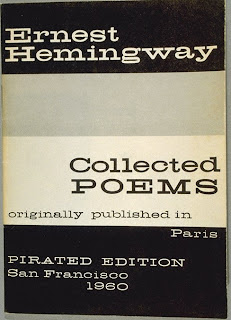 Working in a newspaper office in Kansas City at the age of seventeen, Hemingway started his career as a writer. Before the United States had entered the World War I, he joined a volunteer ambulance unit in the Italian army.

During the 1920's, Hemingway became a member of the group of expatriate Americans in Paris, which he described in his first important work, The Sun Also Rises (1926). A Farewell to Arms (1929), the study of an American ambulance officer's disillusionment in the war and his role as a deserter, was equally successful. Hemingway used his experiences as a reporter during the civil war in Spain as the background for his most ambitious novel, For Whom the Bell Tolls (1940).

I have been a big fan of Hemingway's writing since I started reading "serious" books in sixth grade. I liked his straightforward prose and vocabulary. I liked the dialogue, but came to believe that it was pretty unrealistic (and easy to parody). But I was a bigger fan of the short stories (like those in Men Without Women, In Our Time, The Fifth Column, and The Collected Stories) than the novels. (Oh yeah, throw in A Moveable Feast for memoir.)

Most readers aren't aware that Hemingway wrote any poetry. He didn't write a lot of it, and it's not the best of his writing, but it is interesting to look at some on this anniversary of his birth.

The Lord is my shepherd, I shall not
want him for long.

For we have thought the longer thoughts
And gone the shorter way.
And we have danced to devils' tunes,
Shivering home to pray;
To serve one master in the night,
Another in the day.

A copy of his poems is hard to find (only some used copies on Amazon.com) but you can turn up some with a Google search.

A much misunderstood writer. Hemingway had trouble with his own true self and so created a personae and became a master of self-promotion in a time when that was not a job assigned to an agent or agency.

Today, being your 111th birthday, is a day that is celebrated by all less courageous men in their battle to survive life. Papa, I look forward to drinking a toast to you. It shall be whiskey at sundown. I shall drink it in a single swallow. It will be the first of many. Perhaps on a sandy shore in heaven we"ll share a toast someday.