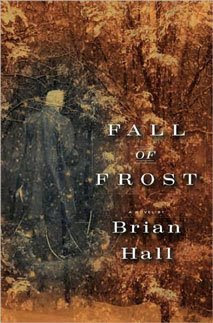 Hall says that he wanted to write the "life story of the poems," and write a book that goes into Frost's inner life.

On the shelf in the bookstore were other traditional biographies: an early one, Gorham B. Munson's Robert Frost: A Study in Sensibility and Good Sense, Lawrance Thompson's three-volume biography, Jeffrey Meyers's Robert Frost and Jay Parini's Robert Frost: A Life. The only one of that group I had read before was the Parini book.


Depending on the book you choose, Frost might be portrayed as a dairy framer, Yankee sage, country sage, a man of rather mean wit, a warmer verson of the Modernists of his time.

I didn't know of Brian Hall, but he has done this novel-bio before with I Should Be Extremely Happy in Your Company, a novel about Lewis and Clark.

Frost’s life has already been squeezed like apples in a press to try to find hidden meanings though he once said that his poetry, "means enough without its being pressed." How many teachers have led students through "The Road Not Taken" or "Stopping By Woods On A Snowy Evening" and pointed out the symbols & meanings?

The book is a series of a 128 non-chronological scenes starting near the end of his life and pausing in his childhood, adulthood, and old age.


The book's title comes, not from Robert Frost, but from a poem by Emily Dickinson.


I watcher her face to see which way
She took the awful news --
Whether she died before she heard
Or in protracted bruise
Remained a few slow years with us --
Each heavier than the last --
A further afternoon to fail,
As Flower at fall of Frost.

Frost's wife, Elinor, plays a role throughout the book, including those times when he slips references to her into the poems. Hall uses the device of a character, "The Younger Poets," to represent Galway Kinnell, Donald Hall, Philip Larkin and other poets in the novel.


The book sometimes gets into the origins of the poems. It's a topic I find that many readers of poetry enjoy hearing - just listen to all the background material most poets give at a reading. But Frost had once warned a biographer that "It would seem soft for instance to look in my life for the sentiments in 'The Death of the Hired Man.' There's nothing to it believe me."


The novel opens in a hotel room in Moscow in November 1962, has the poet waiting to meet Soviet leader Nikita Khrushchev. He was sent by the Kennedy administration in the hope his words might have some softening effect on Russia's grip on Berlin or help the nuclear standoff over Cuba. How strange this hope that words might save the world. How different from today. The mission failed and in three months Frost died, and President Kennedy would be killed the following fall.


From Russia, we cut to Massachusetts July 1900 where Frost’s first child, three-year old Elliot, is dying. And then the scene shifts to a train from Boston in 1940, where Frost meets an adoring young poet who he tells "My son, Carol, died last night. He killed himself…. Please don’t talk to me anymore."

This is Robert Frost as an unsuccessful farmer, tormented father, distanced husband, but mostly as poet. The novel is a good read - simple and rather lonely and sad.