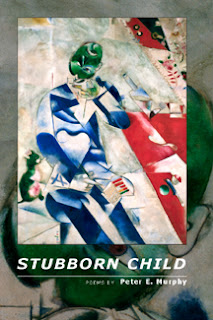 For July, we are looking at Peter Murphy's poem "The Stubborn Child" from his book Stubborn Child which was a finalist for the 2006 Paterson Poetry Prize. The poem has its inspiration in a fairy tale of the same name from the Brothers Grimm.

I never liked fairy tales as a kid. They scared me. I don't like them much now either. I still find them creepy, and I never felt they were stories well told. Someone gave my son a book of Grimm's tales when he was very small and I read a few looking for ones I might read him at night.

That was one of the few books in my life that I threw out. I didn't even want to give it to a used book sale.

Try reading this one to a kid before he goes to sleep. This is the Grimm Brothers' version of "The Stubborn Child."

Once upon a time there was a stubborn child who never did what his mother told him to do. The dear Lord, therefore, did not look kindly upon him and let him become sick.

No doctor could cure him, and in a short time, he lay on his deathbed.

After he was lowered into his grave and was covered over with earth, one of his little arms suddenly emerged and reached up into the air. They pushed it back down and covered the earth with fresh earth, but that did not help. The little arm kept popping out.

So the child’s mother had to go to the grave herself and smack the little arm with a switch. After she had done that, the arm withdrew, and then, for the first time, the child had peace beneath the earth.

from The Complete Fairy Tales of the Brothers Grimm, Jack Zipes, translator, 1987

The puns on Grimm and grim are just too easy.

The Brothers Grimm began collecting folk tales around 1807 and produced a manuscript collection of several dozen tales, which they had recorded by inviting storytellers to their home and transcribing what they heard. It wasn't an academic undertaking and there has been some highly critical re-assessments about their sources and methods. That doesn't affect us in our reading. Actually, I like that their collecting was not so different from someone today collecting the campfire horror stories of kids. That's what some of the Grimm's tales seem like to me anyway. Sometimes the title of this particular little tale is translated as the "willful" child. I realize that willful is basically the same obstinate child, but I think the Murphy poem might be the willful rather than just the stubborn child.

In his version, the child emerges from the grave, lives on and has a daughter to pray over and protect. He resurrects the willful child who is more than stubborn, and who still loves his mother who he knows loves him.

Of Peter's book, Stephen Dunn has said: "Stubborn Child unflinchingly enacts and examines his own painful childhood, then moves to the often damaged and compromised lives of the high school students he teaches. Like the best delineators of unhappiness, he also brings humor to his task, the dark humor of a survivor. And indeed this is a survivor's book, both transforming and transformative — in the end, Murphy the man able to love and affirm, Murphy the poet able to raise the unruly and the tawdry to the level of art."

Transformation is a key word for this prompt.

In an email to me about the poem's creation, Peter said:

"I had a deprived childhood in that I never read a fairy tale till I was in my late 30's, and when I did, I fell in love with the surreal, violent and familiar families portrayed by the Brothers Grimm. This was not Disney. This was Cinderella's evil stepsisters lopping off their heels to squeeze their fat feet into that impossibly tight glass slipper. Perverse entertainment till I came across "The Stubborn Child," perhaps the shortest Grimm tale. "Damn," I thought. "That's my childhood!" And it was, so I proceeded to write 40 or 50 drafts trying to get it right. Somewhere in this frenzy, I realized my own stubborn child was asleep in the next room, and that's when the poem found its ending and its shape, the transformation of the speaker from abused child to wounded father, trying, perhaps too hard, not to repeat the mistakes made on him.

Many stubborn children of all ages inhabit my book Stubborn Child as the poems branch away from my childhood and adolescence to the students who taught me for 30 years in Atlantic City, to other stubborn children, friends and family, who ghost the adult years of my life."

Murphy is not the first to try this self-imposed writing prompt of starting with a Grimm fairy tale. One popular anthology, The Poets' Grimm: 20th Century Poems from Grimm Fairy Tales, is an entire collection of these poems. The poets use the themes, motifs, and characters from Grimm. (poets include Anne Sexton, Carol Ann Duffy, Lucille Clifton, Galway Kinnell, Denise Duhamel, Randall Jarrell, Jane Yolen and Allen Tate. (Here is the table of contents)

Our prompt for this month is to take the story, characters, title, theme (as much as you need) from one of the Brothers Grimm's fairy tales and transform it for your own purposes. I would not be opposed to other fairy tales, but there's a lot of material in those strange tales from Jacob & Wilhelm.

If you want to try the prompt yourself, you can check a book of the tales, or Google a Grimm title that you know, but a good site to start with is SurLaLuneFairyTales.com. It includes tales that we are all familiar with like "Goldilocks and the 3 Bears", and ones I had never read, like "The Girl Without Hands". The tales there are all annotated, so you get some good background information that might well serve as your inspiration. There's a list of the Grimm tales on Wikipedia too.


Here are 2 links where you can read several other poems by Peter Murphy, and hear him reading online.

this is a tough one for me because I do find those stories so unappealing. I will try to get past that and transform one as Murphy did very well.

the sites listed were very interesting - esp. the one with the commentary