I Know You're Out There (I Can Hear You Breathing) 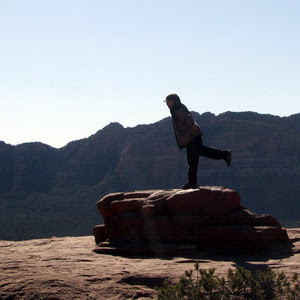 "I Know You're Out There, I Can Hear You Breathing," is one of those old stand up comedian lines to throw out when the audience gets real quiet. Well, in this case it was Poets Online that got quiet.

There hasn't been an update to the site (new poems or prompt) for January or February. The past week I received 5 emails from site regulars asking if everything was OK. There were a few last month too. Mixed concern for the site and for me, which is very thoughtful.

I had a similar situation with a blog I do as part of my job. The server had problems, the blog went offline and suddenly I started getting emails from folks saying, "Hey, your blog is down." More email response than we ever get in comments as a response.

It reminded me of my college days when I had this late night radio show where you suspect that no one is actually listening. No one calls in. No requests. Then the transmitter goes down. And the phone starts ringing. There really were listeners out there.

So, I do know that you're out there. And I do hear you breathing.

The submissions are pretty consistent for the site prompts. There are usually 20-40 per prompt, though a good portion have nothing to do with the prompt.

Interestingly enough, during the past weeks when there was no active prompt, I still received 23 poems.

So where have we been? Well, right here. With the computer still on every day. It's just that work and family have grabbed a tight hold on this one man operation and the part that got squeezed out was the poetry.

But I'm going to give it some time this weekend. Planning to get up a new prompt, the poems from the December 'heroes" prompt and (since January just disappeared) I think I'll put together a page with some of those submissions "unprompted" or sent late or whatever that have come in the past few months as a January page.

I'm hoping the site will return (along with work, family, the weather & life in general) to normal.

Keep those cards and letters coming.
Posted by Poets Online on Friday, February 23, 2007

We are indeed out here breathing and writing. I'm sure I speak for many when I say that you and Poets Online were really missed. Like others, even when I don't submit to a particular prompt, I often write to it both for the enjoyment and also the discipline of trying out something new. I missed the opportunity to do that. Needless to say, the "hero" poems got read a lot in your absence (and they were good).

Life gets crazy at times and sometimes poetry takes a back seat for all of us. Eventually things balance out, and writing resumes, usually richer for the experiences and the silence. We are glad to have you back!

You mean that Poets Online is not some huge conglomerate of poetic aspirations hell bent on conquering the world and raking in the money?