This month I chose the poem "How to Live" by Charles Harper Webb as our model poem.

Charles Harper Webb was a rock guitarist for fifteen years. He's a licensed psychotherapist. He's a professor at California State University. He has written five books of poetry. He uses three names because there are so many Charles Webbs in the world. (Full disclosure: I first looked at his poems a few years ago because I thought he was the guy who wrote The Graduate.)

I stumbled upon his poem "Bombs Over Everywhere" on the Huffington Post blog and I got excited because I thought he might be a blogging poet (he's not).

I suggested that because his poem begins with an epigraph that is a line from a poem by Sharon Olds: "I don't know how to live," we can read the poem as a response to her. Advice on how to live.

It's also a list poem, a form that has often been used. It's a form that I believe many readers and writers dismiss as too easy or less "poetic." It's a form teachers use with students to get them into writing poetry because it is easy.

Then, what makes a list go beyond list to poem? It's worth noting that Webb has a book of prose poems, Hot Popsicles, and that form deals with the same question. If you read other poems by Webb, you know that it's not a question about his ability to write poetry.

The poem has a structure of 5 line stanzas, but the stanza breaks seem arbitrary. Even the line breaks seem to be controlled more by the physical length of the line than by a meter or syllabication. Do you find it full of figurative language? I don't.

There are literary moments in his advice - "Read Dostoyevsky, Whitman, Kafka, Shakespeare, Twain." - followed by "Collect Uncle Scrooge comics." One theme that does run through the advice is contrast - "Don't think TV characters talk to you; that's crazy. Don't be too sane." and "Work hard. Loaf easily."

I have long been a believer in the ars poetica all-poems-are-about-poetry school of reading. Can we look at this poem as not only advice for living but as advice to poets? Should poets try forms that go against their own sense of what is poetry? 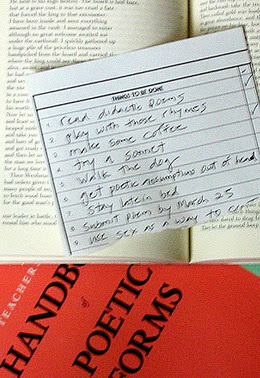 At Poets Online, we have gone down the advice path before: advice to poets, and advice to poets in a poetic form, good advice gone bad, so we don't need to try that again.

To make it more challenging, we want it to be didactic poetry, and put in that pesky rhyme in the way of several poetic games. Ever heard of bouts-rimes (boo-REEM - literally "end rhymes") which is an 18th century parlor game. Partygoers get a list of rhyming words and then have to make a poem from the list keeping the rhymes in their original order. There's also crambo where one player gives a word or line which is matched in rhyme by the other players.

An example often used is Alexander Pope's "An Essay on Criticism."

A little learning is a dangerous thing;
Drink deep, or taste not the Pierian spring:
There shallow draughts intoxicate the brain,
And drinking largely sobers us again.
Fired at first sight with what the Muse imparts,
In fearless youth we tempt the heights of arts,
While from the bounded level of our mind,
Short views we take, nor see the lengths behind;
But more advanced, behold with strange surprise
New distant scenes of endless science rise!

And it is a list poem we are writing. Sometimes you hear that called catalog verse - a list of persons, places, things, or abstract ideas which share a common denominator. It's an ancient form.

I ask that poets use them in any order or scheme. You don't need to use all of them, but it does suggest a line limit of 16 lines (yes, there are ways around that - internal rhyme is one possibility). There are 8 couplets suggested; use 7 and you have a sonnet form.

I feel that that creates a box for your poem, but leaves lots of room for your own decoration.