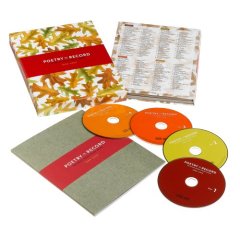 I heard Billy Collins recently talking about Poetry On Record: 98 Poets Read Their Work (1888-2006). It's a collection of poems read by the people who wrote them, from early sound recording to the current day. I didn't even know there were recordings of Walt Whitman reading!

It contains four CDs and a book. They categorize the poems -Romanticism (Dylan Thomas) to Modernism (T.S. Eliot), Harlem Renaissance (Langston Hughes) to Black Arts (Amiri Baraka), from rhyme and meter (Alfred, Lord Tennyson) to free verse (Adrienne Rich) etc. - but that's so "textbook." I would hit the random button on the CD player.

It's interesting to hear how the poets intended their poems to be read aloud - but not all poets are good readers (no names from me), even of their own work.

It would be a good classroom/library purchase. It might be a bit pricey for individuals. You can listen to samples at Amazon.com.

You can listen to Billy Collins talk about this set on NPR's absolutely great program, Fresh Air.

If you get the set or if you just listen to the Fresh Air program or even just the Amazon samples, I'd be curious to know your reactions to the readings. Post a comment below (don't be afraid - you can be totally anonymous)

I liked the readings by William Carlos Williams of "The Red Wheelbarrow" (not the voice I expected and so brief that it begs multiple listenings), "Those Winter Sundays" by Robert Hayden is a great poem well read, and "After Making Love We Hear Footsteps" by Galway Kinnell which I have heard him read and I like having it captured.
Posted by Poets Online on 5/22/2006